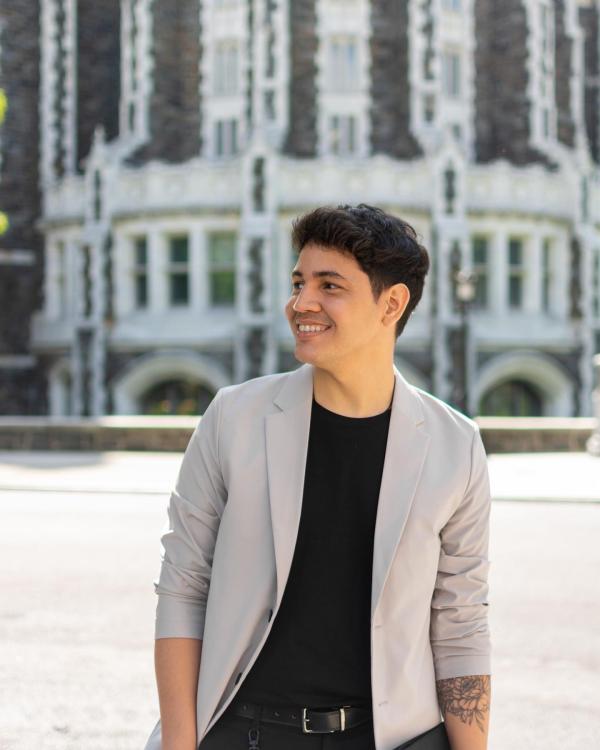 City College of New York’s Bernard and Anne Spitzer School of Architecture alumnus Pedro J. Cruz Cruz, M Arch ’22, won an award at the 2022 Lisbon Architecture Triennial in Portugal. The Triennial is a non-profit organization whose mission is to investigate, stimulate and promote thought and practice in architecture. This year’s theme, Terra, looks into communities throughout the world to embrace our common home, planet Earth, and runs through Dec. 5.

Now an adjunct lecturer at the Spitzer School, Cruz won the highly competitive Millennium bcp Universities Competition Award for his project “El Teatro del Pueblo,” a much-revised version of his second-year studio project, in the main exhibit’s Multiplicity section. It is a work of urban ethnography, using oral histories and filmmaking as an architectural research method, that documents street vendors in Corona Plaza, Queens, NY, and emphasizes how vendors have been historically marginalized.

Cruz submitted the project, after updating his research, with a portfolio and a 12-minute video, and was awarded a certificate and a prize of 1,000 euros.

Also representing CCNY at the Triennial was Adjunct Associate Professor Vyjayanthi Rao, as a member of the Multiplicity curatorial team, and Assistant Professor Jerome Haferd, co-leader of the Dark Matter University Team, also for Multiplicity.

The 28-year-old Cruz moved from Puerto Rico in 2018 when Hurricane Maria’s aftermath caused him to reflect on his aspirations as an architect. The resident of Washington Heights was the recipient of the Social Practice CUNY and Fund for the City of New York Community Planning fellowships during his M Arch studies.

“It was amazing to have the opportunity to have my work exhibited and recognized. Being selected as one of the winners during the event caught me entirely by surprise and felt unreal. It was an incredible experience and made me feel even more proud to represent such an excellent public institution that has given me many growth opportunities,” said Cruz.

With his mentor Associate Professor Nandini Bagchee, Cruz co-teaches the upper-level architecture year-long studio “Building Culture,” which explores emerging cultures of solidarity and self-reliance. Cruz also works as an architect at Marvel, where he learns about community engagement, planning and coastal resilience in New York and Puerto Rico.

Since 1847, The City College of New York has provided a high-quality and affordable education to generations of New Yorkers in a wide variety of disciplines. CCNY embraces its position at the forefront of social change. It is ranked #1 by the Harvard-based Opportunity Insights out of 369 selective public colleges in the United States on the overall mobility index. This measure reflects both access and outcomes, representing the likelihood that a student at CCNY can move up two or more income quintiles. Education research organization DegreeChoices ranks CCNY #3 nationally for social mobility. In addition, the Center for World University Rankings places CCNY in the top 1.8% of universities worldwide in terms of academic excellence. Labor analytics firm Emsi puts at $1.9 billion CCNY’s annual economic impact on the regional economy (5 boroughs and 5 adjacent counties) and quantifies the “for dollar” return on investment to students, taxpayers and society. At City College, more than 15,000 students pursue undergraduate and graduate degrees in eight schools and divisions, driven by significant funded research, creativity and scholarship. This year, CCNY launched its most expansive fundraising campaign, ever. The campaign, titled “Doing Remarkable Things Together” seeks to bring the College’s Foundation to more than $1 billion in total assets in support of the College mission. CCNY is as diverse, dynamic and visionary as New York City itself. View CCNY Media Kit.