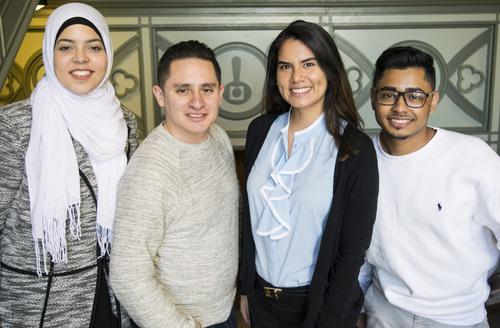 There’s no question that generations of university students want to change the world, starting with where they are. But how? Four undergraduates from The City College of New York are among 229 students from 10 countries named 2017 University Innovation Fellows by Stanford University’s Hasso Plattner Institute of Design. The program empowers students to become agents of change at their schools. Fellows work to ensure that their peers gain the knowledge, skills and attitudes required to compete in the economy of the future and make a positive impact on the world.

Selected from City College (the only CUNY school represented) are:

In addition to six-weeks of online training designed by Stanford, they will attend a “Silicon Valley Meetup,” Nov. 16 – 20, with the other 225 Fellows. They will take part in immersive experiences at Stanford’s d.school and Google, and work with leaders in education and industry.

“We’ll also participate in experiential workshops and exercises focused on such topics as   building a movement, creating spaces for innovation, designing of learning experiences, and creating new models for change in higher education,” said Ahamed.

The team will embark on their CCNY mission in the spring semester, titled, according to   Elsayed, “Fostering and Implementing Innovation, Inspiring and Bringing Students Together.” Ardiles summed it up as an effort, led by students for students, to promote entrepreneurship and innovation.

“Our goal is to help students that may have the knowledge and skills but don’t know to implement their ideas,” added Obando.

This is the second cohort of UI Fellows. Like their predecessors last year, the four were mentored and sponsored by CCNY’s Zahn Innovation Center.