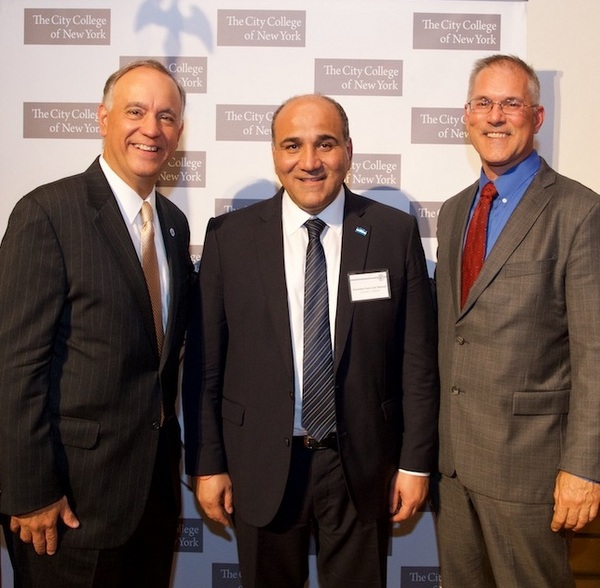 Evoking The City College of New York’s legacy of access and opportunity, Dr. Juan Manzur, governor of the Argentine province of Tucumán, paid homage to CUNY’s founding college on a visit to its Harlem campus.

Manzur, who sees education as key to developing his agricultural province of 1.8 million in the northwest, hailed City College, which has established extensive ties with Tucumán, as an inspiration.

“At this (college), they took in immigrants, they formed them and today, many of the men and women that went through this college are the men and women that made this country great,” Manzur told the audience, including retired Congressman Charles Rangel, CUNY Chancellor Félix V. Matos Rodríguez, and CCNY President Vincent Boudreau.

“We know the history quite well,” he added. “We know that you even have Nobel Prize winners. That’s why we are so proud to be here. It’s an historical day for us.”

The Universidad Nacional de Tucumán (UNT), one of Argentina’s largest educational institutions with more than 60,000 students, is a major CCNY partner. Their ties cover:

Speaking in the context of these collaborations, Manzur said: “I want the best for my people. I want them to study, to develop and [create] a society in the future that is diverse and educated."

President Boudreau, who led a CCNY delegation to Tucumán early this year to expand ties, noted that over the years, CCNY has assisted in the education of Tucumán’s teachers and engaged in the exchange of expertise between researchers and faculty.

He described Mazur as an “extraordinary governor,” adding: “We want to take this opportunity to celebrate our friendship.”

Manzur received the CCNY President’s Award at the event co-sponsored by the Colin Powell School for Civic and Global Leadership at City College.

Chancellor Rodríguez said CUNY would continue to support CCNY’s  efforts to advance its collaborations with Tucumán and the Argentine nation.