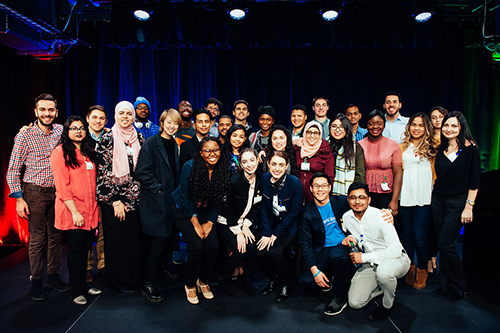 Members of some of the Zahn Center's 2018 Venture Competition Cohort teams.

The inaugural Zahn Innovation Summit will kick off on Tuesday, March 6 as leaders in the NYC startup community and emerging entrepreneurs gather at The City College of New York’s North Academic Center. The summit includes workshops, a fireside chat with the Chief Technology Officer of New York City Miguel Gamiño, and a discussion about the power of investment in non-traditional founders.

The summit is part of NYC Open Data Week, celebrating the city’s investment in open data resources for the tech community, and will feature important discussions on topics like diversity in tech and renewable energy investments in NYC. Participants will also meet the Zahn Innovation Center’s current class of stellar startups.

The summit will kick off with skill-building workshops for entrepreneurs and pitches from the Zahn Center’s newest cohort of 24 startups that are competing for over $150,000 in prizes. Their first public pitch is in preparation for Demo Day later this semester, which is an annual event to showcase their prototypes and business models.

Linda Villarosa, author, journalist and program director of journalism at CCNY, will moderate an investor panel to discuss the importance of investing in marginalized entrepreneurs. Featured speakers include: Rehana Nathoo of Spectrum Impact, Lorine Pendleton of Portfolia Funds, Clayton Banks of Silicon Harlem, and CCNY alumna Elizabeth Vilchis of latinoTech.

For more information, click here. All CCNY students, faculty and staff can attend the summit for free, and tickets are available for the public through Eventbrite. This event is made possible in partnership with the Mayor’s Office of Data Analytics, Silicon Harlem, NYCEDC’s Futureworks program, and a VentureWell grant at CCNY to support Entrepreneurship and Renewable Energy.

About the Zahn Innovation Center
The Zahn Innovation Center was established by the City College Fund in 2012, with support from the Moxie Foundation and the Manhattan Borough President’s Office, as an incubator at the City College of New York (CCNY). The Zahn Center empowers students to develop entrepreneurial skills while incubating the most promising technology startups and social impact ventures. We provide co-working space, a campus-wide speaker series, and four entrepreneurship competitions with prize money.