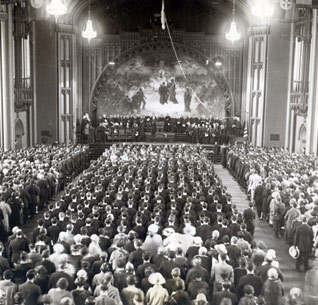 The City College of New York was originally founded as the Free Academy of the City of New York in 1847 by wealthy businessman and president of the Board of Education, Townsend Harris, who would go on to establish diplomatic relations between the United States and Japan. Ratified by a statewide referendum, it was established to provide children of immigrants and the poor access to free higher education based on academic merit alone.

Dr. Horace Webster, a West Point graduate, was the first president of the Free Academy. When it opened on, January 21, 1849, Webster said:

City College thus became one of the nation's great democratic experiments, and it remains today one of its great democratic achievements. Even in its early years, the Free Academy showed tolerance for diversity, especially in comparison to the private universities in New York City.

In 1866, the Free Academy, a men's institution, was renamed the College of the City of New York. In 1867 the academic senate, the first student government in the nation, was formed. General Alexander S. Webb, one of the Union's heroes at the battle of Gettysburg, also presided over the College in the 19th century.

In the early 1900s, President John H. Finley gave the College a more secular orientation by abolishing mandatory chapel attendance â€“ a change that occurred at a time when more Jewish students were enrolling in the College.

In 1907, City College moved to what was then called Mahattanville, now the heart of Harlem, to the Neo-Gothic campus designed by George Browne Post, the architect of the Stock Exchange.Today, those buildings are landmarked, and the campus has expanded to 36 tree-lined acres.

In 1930, CCNY admitted women for the first time, but only to graduate programs. In 1951, the entire institution became coeducational. In the years when top-flight private schools were restricted to the children of the Protestant establishment, thousands of brilliant individuals (including Jewish students) attended City College because they had no other option. City's academic excellence and status as a working-class school earned it the titles "Harvard of the Proletariat," "the poor man's Harvard," and "Harvard-on-the-Hudson." Ten CCNY graduates went on to win Nobel Prizes. Like City students today, they were the children of immigrants and the working class, and often the first of their families to go to College.

The Baruch School of Business at the City College of New York, named after CCNY alumnus Bernard Baruch, opened on 23rd Street in Manhattan in 1919, and became Baruch College in 1961 with the establishment of The City University of New York - now the largest public urban university system in the United States, and consisting of 24 institutions, including its founding college, City College.

The City College art collection encompasses contemporary works acquired through Percent for Art projects, historic portraits and commissioned works, ancient artifacts and early casts, and the gifts of generous alumni, faculty and friends of the College (Courtesy of CCNY Library).