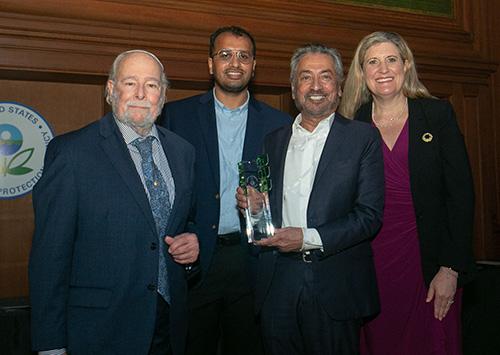 At the helm of The City College of New York’s pioneering research in the field, Sanjoy Banerjee, Distinguished Professor of Chemical Engineering in the  Grove School of Engineering and Director of the CCNY-based CUNY Energy Institute, is the recipient of the U.S. Environmental Protection Agency’s 2019 Green Chemistry Challenge Academic Award for developing “rechargeable Alkaline Zn-MnO2 Batteries for Grid Storage Applications.” The Award citation also notes the important project-related partnerships with Sandia National Laboratories, Brookhaven National Laboratory, the Energy Storage Program of the Office of Electricity, Department of Energy, and Urban Electric Power, Inc.

The Green Chemistry Awards promote the environmental and economic benefits of developing and using novel green chemistry. They recognize chemical technologies that incorporate the principles of green chemistry into chemical design, manufacture, and use.

Banerjee and his partners were recognized by the EPA in Washington, D.C., for a significant breakthrough in green technology initiated at the Grove School. They developed large-scale zinc-manganese oxide batteries that can be recharged thousands of times without the typical decrease in the length of the battery’s life-time. The batteries do not have the safety and environmental limitations of lithium-ion and lead-acid batteries, and use zinc and manganese, materials that are non-toxic and abundant.

Grove School researchers key to the success of the project included Dr. Nilesh Ingale, who together with research associate Michael Nyce built the early zinc-manganese dioxide prototype batteries in 2012; Dr. Gautam Yadav, who made the breakthrough discovery of how to access the full theoretical capacity of  the manganese dioxide cathode in 2015- solving a hundred-year old problem; and Dr. Jinchao Huang, who in 2017 conceived the separators that blocked the anode materials from diffusing to the cathode and degrading its performance.

The technology has now been commercialized for use in grid stabilization, renewable energy storage, and in households. The batteries are available through Urban Energy Power, Inc., a spinoff of the CUNY Energy Institute with a manufacturing plant in Pearl River, New York.

About the Grove School of Engineering