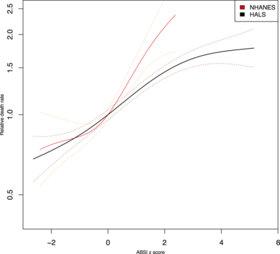 | Click to view larger image |
Comparison of mortality hazard by ABSI for NHANES 1999–2004 compared to HALS1. Estimates are from proportional hazard modeling where log mortality hazard is a smoothing-spline function in ABSI z score (calculated using NHANES normals). Curves are positioned so that an ABSI z score of 0 has a relative death rate of 1. Dashed curves show 95% confidence intervals. The ranges shown cover the 1st through 99th percentiles of ABSI in each sample. The vertical axis is logarithmic.

In 2012, Dr. Nir Krakauer, an assistant professor of civil engineering in CCNY’s Grove School of Engineering, and his father, Dr. Jesse Krakauer, MD, developed a new method to quantify the risk specifically associated with abdominal obesity.

A follow-up study, published February 20 by the online journal PLoS ONE, supports their contention that the technique, known as A Body Shape Index (ABSI), is a more effective predictor of mortality than Body Mass Index (BMI), the most common measure used to define obesity.

The team analyzed data for 7,011 adults, 18+, who participated in the first Health and Lifestyle Survey (HALS1), conducted in Great Britain in the mid 1980s, and a follow-up survey seven years later (HALS2). The sample was broadly representative of the British population in terms of region, employment status, national origin, and age. They used National Health Service records through 2009 to identify deaths and cancer cases: 2,203 deaths were recorded among the sample population.

Then, they compared all-cause mortality from the HALS sample with ABSI and other variables, including BMI, waist circumference, waist – hip ratio and waist – height ratio.

The analysis found ABSI to be a strong indicator of mortality hazard among the HALS population. Death rates increased by a factor of 1.13 (95% confidence interval, 1.09–1.16) for each standard deviation increase in ABSI. Persons with ABSI in the top 20 percent were found to have death rates 61 percent than those with ABSI in the bottom 20 percent.

The results tracked closely with the earlier study, which used data from the National Health and Nutrition Examination Survey (NHANES), conducted in the United States between 1999 and 2004. This provides stronger evidence that ABSI is a valid indicator of the risk of premature death across different populations. Further, they showed that ABSI outperformed commonly used measures of abdominal obesity, including waist circumference, waist – hip ratio and waist – height ratio.

Also, because the data came from two surveys seven years apart, the researchers were able to assess the effect of change in ABSI on mortality. The found an increase in ABSI correlated with increased risk of death, and that the more recent ABSI measurement was a more reliable predictor. Noting this, the researchers contend that further investigation is warranted into whether lifestyle or other interventions could reduce ABSI and help people live longer.

Persons curious about their ABSI and how it compares with the general population can try the online calculator at http://www-ce.ccny.cuny.edu/nir/sw/absi-calculator.html.