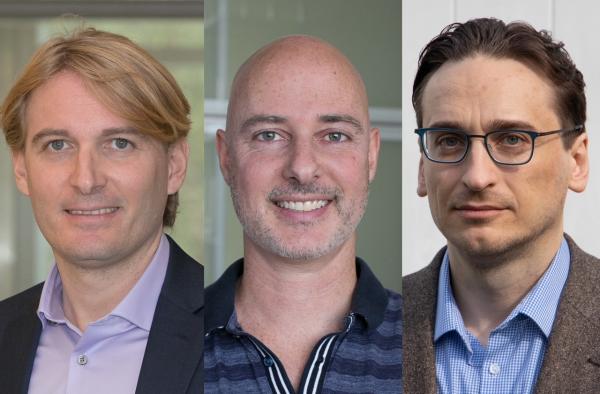 From left: CCNY’s Andrea Alù, Robert Anderson and Alexander Khanikaev appear on the 2022 list of the world’s Highly Cited Researchers.

The highly awaited annual list identifies elite researchers worldwide who demonstrated significant influence in their chosen field or fields through the publication of multiple highly cited papers during the last decade. This recognition draws from the publications that rank in the top 1% by citations for field and publication year in the Web of Science™ citation index.

In 2022, fewer than 7,000, or about 0.1%, of the world's researchers, in 21 research fields and across multiple fields, have earned this exclusive distinction.

The methodology that determines the “who’s who” of influential researchers draws on the data and analysis performed by bibliometric experts and data scientists at the Institute for Scientific Information™ at Clarivate. It also uses the tallies to identify the countries and research institutions where these citation elite are based.
Following are brief bios of CCNY’s three HCRs:

Andrea Alù:
A Highly Cited Researcher since 2017, Alù is Distinguished Professor, founding director of the Photonics Initiative at the CUNY ASRC on the CCNY campus, Einstein Professor of Physics at the Graduate Center, CUNY, and electrical engineering professor in CCNY’s Grove School. He is a Fellow of the National Academy of Inventors, the American Association for the Advancement of Science, the Institute of Electrical and Electronics Engineers, the Materials Research Society, the Optical Society, the Society of Photo-Optical Instrumentation Engineers, and the American Physical Society. He has received several scientific awards, including the Blavatnik National Award for Physical Sciences and Engineering, the IEEE Kiyo Tomiyasu Award, the ICO Prize in Optics, the NSF Alan T. Waterman award, the OSA Adolph Lomb Medal, and the URSI Issac Koga Gold Medal.

Robert Anderson:
This is the fourth year running that Anderson has made the HCR list. He conducts biogeographic studies at the interface between ecology and evolution, drawing upon diverse data sources (fieldwork, morphology, climatology, remote sensing, physiology, and genetics). In interdisciplinary collaborations, he has developed the use of machine-learning principle Maxent for modeling species niches and distributions. These models are broadly applied in conservation biology, invasive species, zoonotic diseases, and the effects of climate change on biodiversity. In addition to his faculty position at CCNY and the Graduate Center, CUNY, he’s a Research Associate at the American Museum of Natural History and a Blavatnik Science Scholar.

Alexander Khanikaev:
Khanikaev pioneered topological photonics, a relatively new subject of research. His work promises to revolutionize approaches to manipulate electromagnetic waves from radiofrequencies to optics, which can benefit a broad range of applications from lasers and telecommunications to quantum computing. Khanikaev’s research has earned him election as a Fellow Member of Optica (formerly known as The Optical Society of America), and as the recipient of the rarely bestowed ‘Special Creativity’ award from the National Science Foundation. In addition to CCNY’s Grove School of Engineering, his affiliation includes the Graduate Center, CUNY.

David Pendlebury, Senior Citation Analyst at the Institute for Scientific Information at Clarivate said: “It is increasingly important for nations and institutions to recognize and support the exceptional researchers who are driving the expansion of the world’s knowledge. This list identifies and celebrates exceptional individual researchers at The City College of New York who are having a significant impact on the research community as evidenced by the rate at which their work is being cited by their peers. The research they have contributed is fueling the innovation, sustainability, health and security that is key for our society’s future.”