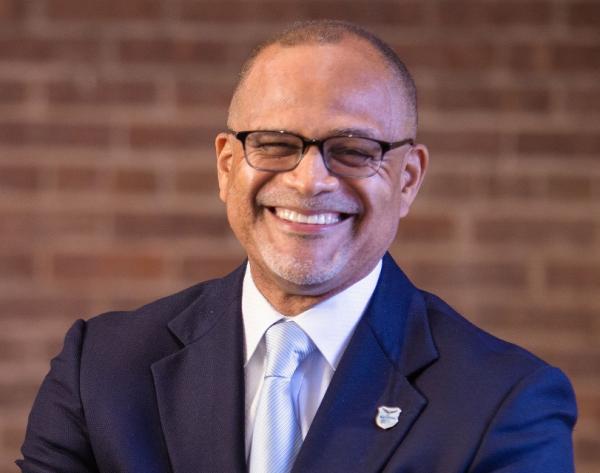 Schools Chancellor David Banks presents his vision for New York City public schools when he speaks at CCNY on April 28.

David C. Banks, who as Chancellor of the New York City Department of Education heads the largest school system in the nation, speaks at The City College of New York on Thursday, April 28. The Chancellor will present his vision for the city’s more than 1,700 schools and little more than a million students in his talk entitled: “A Conversation with David Banks: The Vision for NYC Public Schools.” The invitation-only event starts at 5 p.m. in CCNY’s Great Hall, located in Shepard Hall. CCNY Provost Tony Liss will be the moderator.

Banks assumed the office of Chancellor on Jan. 1, 2022, becoming the 32nd person to head the city’s school system since James Wilson Farr in 1875. He returns to CCNY where he earned his certificate in School District Leadership from the School of Education’s Program for Educational Leadership. The School celebrated its centennial last year.

Banks’ vision of education emphasizes a partnership between schools and communities based on the guiding principles of academic excellence, leadership, and character development. With the Eagle Academy Foundation, he set out to prove that a high-quality college preparatory education for young men of color can be provided in a public-school setting.

In 2004, Banks led the establishment of the first Eagle Academy for Young Men as part of New York City’s high school reform initiative in partnership with 100 Black Men, Inc. The Eagle model has since been adopted in schools throughout all five New York City boroughs and Newark, N.J., expanding nationally through the Eagle Institute.

In 2019, in partnership with Scholastic, Banks helped curate the Rising Voices Library, a collection of nonfiction, biographical, and fiction books celebrating Black and Latino boys designed to provide students in grades K–5 with high-interest, culturally-relevant texts that give context to what they’re experiencing in the world around them. He also authored the book “SOAR: How Boys Learn, Succeed, and Develop Character,” published in 2015.

Banks is a co-founder of Black EdFluencers United, an organization dedicated to influencing and developing the capacity of Black educators and raising awareness about systemic challenges within education. He has also served as a member of the Board of Directors for the International Boys’ Schools Coalition, co-chair of New York City Young Men's Initiative, and founding board member of the Coalition of Schools Educating Boys of Color.

In addition to CCNY, Banks is a graduate of Rutgers University and received his Juris Doctorate from St. John’s University School of Law. In 2003, Banks participated in the Cahn Fellows Program for Distinguished Principals at the Teachers College Columbia University. In May 2014, he was awarded an honorary doctorate degree in education from Wheelock College.