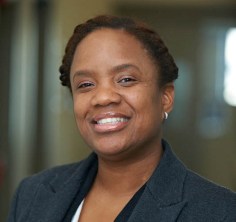 Deidre Anglin, clinical psychologist in the Colin Powell School and lead author of a racial analysis of social determinants of psychosis in the United States.

In a first of its kind review in the United States, social scientists led by The City College of New York’s Deidre M. Anglin suggest that the legacy of systemic racism in the U.S. shapes racial inequities in social determinants of psychosis at neighborhood and individual levels.

Anglin and her co-authors examine U.S.-based evidence that connects characteristics of the social environment with outcomes across the psychosis continuum, from psychotic experiences to schizophrenia. Their study, entitled “From Womb to Neighborhood: A Racial Analysis of Social Determinants of Psychosis in the U.S.,” appears in the American Journal of Psychiatry published today.

“The notion that inequitable social and economic systems of society significantly influence psychosis risk through proxies, such as racial minority and immigrant statuses, has been studied more extensively in European countries,” noted the Journal. “While there are existing international reviews of social determinants of psychosis, none to our knowledge focus on factors in the U.S. context specifically—an omission that leaves domestic treatment development and prevention efforts incomplete and underinformed.”

The experts first describe how a legacy of structural racism in the United States has shaped the social gradient, highlighting consequential racial inequities in environmental conditions. They offer a hypothesized model linking structural racism with psychosis risk through interwoven intermediary factors based on existing theoretical models and a review of the literature.

Neighborhood factors, cumulative trauma and stress; and prenatal and perinatal complications were three key areas selected for review by the authors because they reflect social and environmental conditions that may affect psychosis risk through a common pathway shaped by structural racism.

The study details evidence showing that Blacks and Latinx populations suffer disproportionately from risk factors within these three key areas, in large part as a result of racial discrimination and social disadvantage.

According to the article in the American Journal of Psychiatry, this broad focus on individual and community factors is intended to provide a consolidated space to review this growing body of research and to guide continued inquiries into social determinants of psychosis in U.S. contexts.

Anglin, associate professor of clinical psychology in City College’s Colin Powell School for Civic and Global Leadership, said: “A shift in funding priorities and training that better reflects the reviewed evidence is urgently needed in North American psychiatry to advance intervention development and prevention efforts that are consistent with an anti-racism framework.”