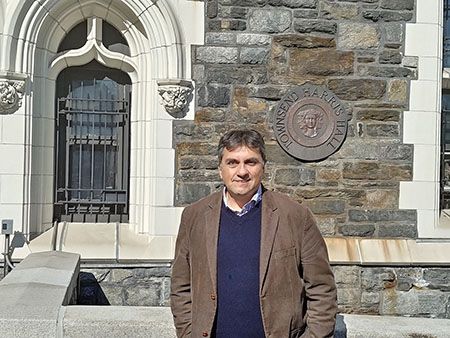 Gonzalo Torres, medical professor and chair of the Department of Molecular, Cellular & Biomedical Sciences at the CUNY School of Medicine at The City College of New York, receives two grants from the National Institute of Health to establish centers that support and mentor diversity junior faculty members doing neuroscience and drug addiction research.

“These grants will support faculty in neuroscience who will become stronger researchers and mentors,” said Torres, the principal investigator on both projects. “It’s my hope that we will be able to recruit a significant number of talented diversity junior faculty from City College and CUNY.”

The first of two grants come from NIH’s National Institute of Neurological Disorders and Stroke (NINDS) to support and establish the "Mentoring Institute for Neuroscience Diversity Scholars," a national program that will support diversity junior faculty members doing neuroscience research. The amount awarded is $1.25 million over five years.

A native of Chile, his research uses a multidisciplinary approach to examine the role of protein interactions in the control of dopamine homeostasis and in dopamine-related diseases including drug addiction and Parkinson’s disease. For over 15 years, Torres has been funded by NIH, NSF and NARSAD, and he has received the Presidential Early Career Award under President Obama as well as several other honors.