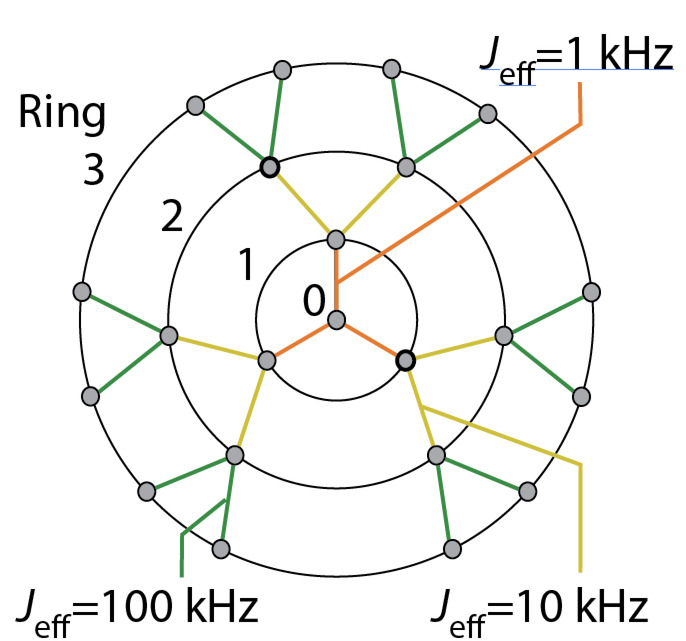 Image represents a system of nuclear spins whose interactions are mediated by electron spins.

In physics, thermalization, or the trend of sub-systems within a whole to gain a common temperature, is typically the norm. There are situations, however, where thermalization is slowed down or virtually suppressed; examples are found when considering the dynamics of electron and nuclear spins in solids, where certain sub-groups behave as if isolated from the rest. Understanding why this happens and how it can be controlled is presently at the center of a broad effort, particularly for applications in the emerging field of quantum information technologies.

Reporting in the latest issue of “Science Advances,” a group of researchers based at The City College of New York (CCNY) provide new insights on the dynamics of spin thermalization at the nanoscale. The paper is entitled: “Optically pumped spin polarization as a probe of many-body thermalization,” and the work was carried out under the supervision of Carlos A. Meriles, the Martin and Michele Cohen Professor of Physics in CCNY’s Division of Science.

One of the main hurdles to investigating nanoscale thermalization is the huge disparity between the numbers of thermal and athermal spins, the latter being only a tiny fraction of the total. To show the flow of spin polarization between these groups, experiments must be simultaneously sensitive to both groups, a difficult proposition as most techniques are adapted to one group or the other but ill-suited for both. Working with physicists at the University of California, Berkeley, and Argentina’s Universidad Nacional de Cordoba, Meriles’ CCNY group developed a technique that circumvents this problem. Further, using this technique it was possible to see that under certain specific conditions, it is possible to make those isolated ('athermal') spins 'communicate' with the rest.

Because the electron spin is much stronger than the nuclear spin, carbons close to NVs or P1s experience a local magnetic field, absent for carbons that are farther away. Because of the local field they experience, hyperfine-coupled carbons have been traditionally assumed to be isolated from the rest, in the sense that, if polarized, they cannot pass this polarization to the bulk, i.e., their spin is frozen or 'localized', hence leading to an ‘athermal’ behavior.

“Our experiments demonstrate that the ideas above are not valid when the concentration of electron spins is sufficiently high. In this limit, we find that hyperfine coupled and bulk nuclei communicate efficiently because groups of electron spins serve as effective linkers to move around otherwise isolated nuclear spin polarization. We find this process can be really effective, leading to fast nuclear spin transport rates, exceeding even those between bulk nuclei,” said Meriles.

Overall, the CCNY team’s findings could help realize devices that use electron and nuclear spins in solids for quantum information processing or sensing at the nanoscale. Indirectly, it could also help implement states of high nuclear spin polarization that could be applied in MRI and NMR spectroscopy.