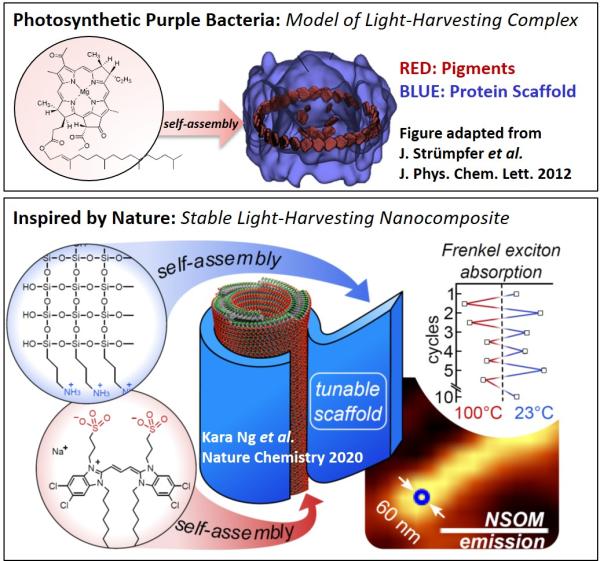 Inspired by nature, researchers at The City College of New York (CCNY) can demonstrate a synthetic strategy to stabilize bio-inspired solar energy harvesting materials. Their findings, published in the latest issue of  “Nature Chemistry,” could be a significant breakthrough in functionalizing molecular assemblies for future solar energy conversion technologies.

In almost every corner of the world, despite extreme heat or cold temperature conditions, you will find photosynthetic organisms striving to capture solar energy. Uncovering nature’s secrets on how to harvest light so efficiently and robustly could transform the landscape of sustainable solar energy technologies, especially in the wake of rising global temperatures.

“Although we can’t replicate the complexity of the protein scaffolds found in photosynthetic organisms, we were able to adapt the basic concept of a protective scaffold to stabilize our artificial light-harvesting antenna,” said Dr. Kara Ng. Her co-authors include Dorthe M. Eisele and Ilona Kretzschmar, both professors at CCNY, and Seogjoo Jang, professor at Queens College.

“The failure may lie in the design paradigm of current solar cell architectures,” said Eisele.  However, she and her research team, “do not aim to improve the solar cell designs that already exist.  But we want to learn from nature’s masterpieces to inspire entirely new solar energy harvesting architectures,” she added.

Inspired by nature, the researchers demonstrate how small, cross-linking molecules can overcome barriers towards functionalization of supra-molecular assemblies. They found that silane molecules can self-assemble to form an interlocking, stabilizing scaffold around an artificial supra-molecular light-harvesting antenna.

“We have shown that these intrinsically unstable materials, can now survive in a device, even through multiple cycles of heating and cooling,” said Ng. Their work provides proof-of-concept that a cage-like scaffold design stabilizes supra-molecular assemblies against environmental stressors, such as extreme temperature fluctuations, without disrupting their favorable light-harvesting properties.

The research was supported by CCNY’s Martin and Michele Cohen Fund for Science, the Solar Photochemistry Program of the U.S. Department of Energy, Office of Basic Energy Sciences and the National Science Foundation (NSF CREST IDEALS and NSF-CAREER).

About the City College of New York.
Since 1847, The City College of New York has provided a high-quality and affordable education to generations of New Yorkers in a wide variety of disciplines. CCNY embraces its position at the forefront of social change. It is ranked #1 by the Harvard-based Opportunity Insights out of 369 selective public colleges in the United States on the overall mobility index. This measure reflects both access and outcomes, representing the likelihood that a student at CCNY can move up two or more income quintiles. In addition, the Center for World University Rankings places CCNY in the top 1.8% of universities worldwide in terms of academic excellence. Labor analytics firm Emsi puts at $1.9 billion CCNY’s annual economic impact on the regional economy (5 boroughs and 5 adjacent counties) and quantifies the “for dollar” return on investment to students, taxpayers and society. At City College, more than 16,000 students pursue undergraduate and graduate degrees in eight schools and divisions, driven by significant funded research, creativity and scholarship. CCNY is as diverse, dynamic and visionary as New York City itself. View CCNY Media Kit.