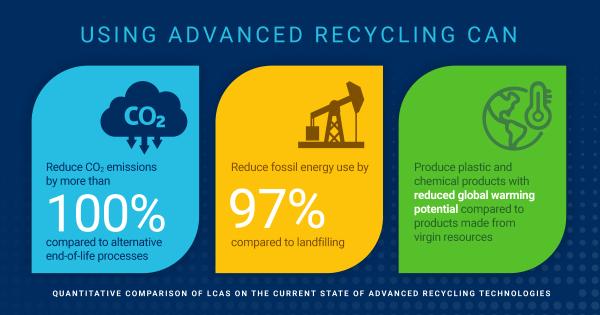 The authors examined 13 recently completed life cycle assessments (LCAs) and found that advanced recycling can transform hard-to-recycle plastics into products with a smaller carbon footprint than those made from new resources. The processes also reduce energy use and greenhouse gas emissions compared to conventional end of life methods, such as landfilling and waste-to-energy. Use of advanced recycling contributed to circularity for plastics in all 13 LCAs.

Specifically, the report found that advanced recycling technologies can:

“As advanced recycling becomes increasingly efficient, it is poised to play a major role in achieving global sustainability goals,” said Castaldi. “It can transform hard-to-recycle plastics into a multitude of high-value feedstocks, reducing the need for fossil resources and limiting the environmental impact of waste management. Equally important, the data suggest that our transition to a more circular economy will dramatically improve climate outcomes.”

“There’s been significant investment and interest from companies and policymakers in advanced recycling,” said Bob Hall at the American Society of Mechanical Engineers’ Research Committee on Energy, Environment, and Waste. “Scientific studies like this one from CCNY, coupled with engineering ingenuity can help inform and responsibly move us towards a more sustainable and circular future. As these technologies mature, it is imperative to conduct additional studies on advanced recycling that adhere to international LCA standards.”

“ASME suggests that technologies that have current operating performance data and have a facility to visit should be given priority for future analyses,” added Annette Scotto, ASME Chair of the Material and Energy Recovery Division.

The report is titled “Quantitative Comparison of LCAs on the Current State of Advanced Recycling Technologies.” Click here to read it in its entirety.