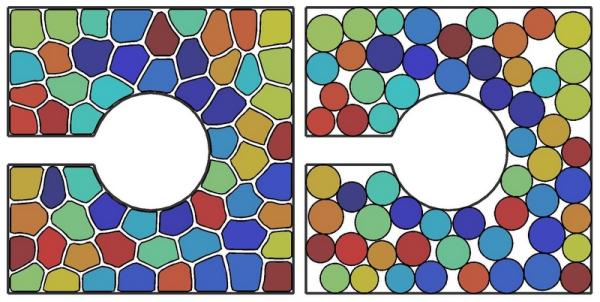 A new computational model developed by researchers from The City College of New York and Yale gives a clearer picture of the structure and mechanics of soft, shape-changing cells that could provide a better understanding of cancerous tumor growth, wound healing, and embryonic development.

Mark D. Shattuck, professor of physics at City College’s Benjamin Levich Institute, and researchers at Yale developed the new efficient computational model. It allows simulated particles to realistically change shape while conserving volume during interactions with other particles. Their results appear in the latest edition of   “Physical Review Letters.”

Developing computer simulations of particles, such as sand grains and ball bearings, is straightforward because they do not readily change shape. Doing the same for cells and other deformable particles is more difficult, and the computational models researchers currently use do not accurately capture how soft particles deform.

The computational model developed by Shattuck and lead investigator from Yale, Corey O’Hern, tracks points on the surfaces of polygonal cells. Each surface point moves independently, in accordance with its surroundings and neighboring particles, allowing the shape of the particle to change. It is more computationally demanding than current simulations, but necessary to correctly model particle deformation.

“We now have an efficient accurate computational model to investigate how discrete, deformable particles pack,” Shattuck said. It also allows researchers to easily adjust cell-cell interactions, consider directed motion, and can be used for both 2D and 3D systems.

One unexpected result from the model shows that deformable particles must deviate from a sphere by more than 15% to completely fill a space.

“In our new model, if no external pressure is applied to the system, the particles are spherical,” O’Hern said. “As the pressure is increased, the particles deform, increasing the fraction of space that they occupy. When the particles completely fill the space, they will be 15% deformed. Whether it’s bubbles, droplets, or cells, it’s a universal result for soft, particle systems.”

Among other applications, this technology may give researchers a new tool to examine how cancerous tumors metastasize. “We can now create realistic models of the packing of cells in tumors using computer simulations, and ask important questions such as whether a cell in a tumor needs to change its shape to become more capable of motion and eventually leave the tumor.”

About The City College of New York
Since 1847, The City College of New York has provided a high quality and affordable education to generations of New Yorkers in a wide variety of disciplines. CCNY embraces its role at the forefront of social change. It is ranked #1 by The Chronicle of Higher Education out of 369 selective public colleges in the United States on the overall mobility index. This measure reflects both access and outcomes, representing the likelihood that a student at CCNY can move up two or more income quintiles. In addition, the Center for world University Rankings places CCNY in the top 1.2% of universities worldwide in terms of academic excellence. More than 16,000 students pursue undergraduate and graduate degrees in eight professional schools and divisions, driven by significant funded research, creativity and scholarship. CCNY is as diverse, dynamic and visionary as New York City itself. View CCNY Media Kit.