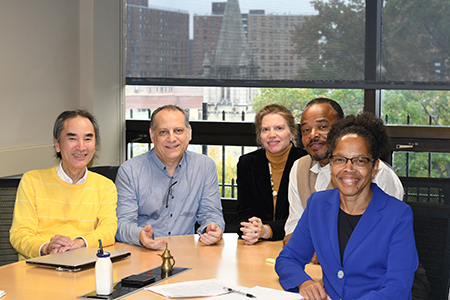 Connecting the Dots (CTD) is a highly collaborative project between the flagship schools in the City University of New York (CUNY) system, the largest urban university system in the country, and the State University of New York (SUNY) system, the largest higher education system in the nation. The City College of New York’s Grove School of Engineering and the University at Buffalo’s collaboration has been funded by the National Science Foundation and is aimed at strengthening the proficiency of data science competencies and analytics among students pursuing an undergraduate engineering degree.

Grove School Dean Gilda Barabino leads the development and implementation of the innovative project titled “Connecting the Dots.” The project will strengthen the ability to understand and effectively use data to inform decisions among diverse undergraduate students from across engineering disciplines. It will also increase the capacity of regional community partners to incorporate data analytical methods into their business or strategic planning objectives.

The three-year $400,000 grant supports the creation of the signature academic data science track—the New York Data Science Scholars Program. It will be capable of being readily integrated with any engineering major and effectively complement existing computer science majors at both the undergraduate and graduate levels. Once established, it can be easily adopted by other SUNY and CUNY campuses that host four-year engineering programs.

The team of co-PIs working to launch the program this fall are: