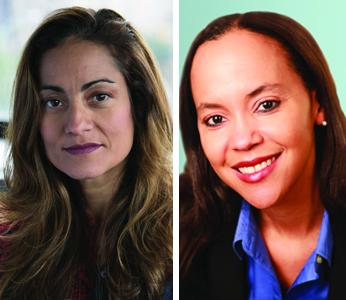 CCNY's Adriana Espinosa (left) and Lesia M. Ruglass, two of the co-leaders of the tobacco use study.

Dr. Adriana Espinosa, assistant professor, psychology, in The City College of New York’s Colin Powell School for Civic and Global Leadership, is the principal investigator of a $467,205 grant from the National Institutes of Health (NIH) for an innovative study of tobacco use and its varying impact on white and Black adolescents. Entitled “An intersectional examination of early tobacco use among white and Black adolescents,” the two-year study also involves researchers from the University of Texas at Austin, and the Roswell Park Comprehensive Cancer Center.

“The project will identify differences in the types and accumulation of multiple risk and protective factors for tobacco use between white and Black adolescents over time,” said Espinosa, whose research expertise includes health disparities and health behaviors. “The purpose is to understand factors explaining differences in early tobacco use between white and Black youth with the long-term goal of developing interventions that reduce tobacco-related health disparities among Black individuals. This developmental project is the first step in this direction because it will identify groups of Black adolescents who face the highest risks of tobacco-related illnesses.”

Future projects will create interventions to prevent and mitigate tobacco use and related consequences among those who face the highest risks.

The collaborative work will be done at City College. Espinosa’s co-investigators include:

In addition to this new research, Espinosa and Ruglass are also involved in an innovative National Institute on Drug Abuse-funded study to evaluate the effectiveness of substance use disorder treatments for Black people who use cocaine.