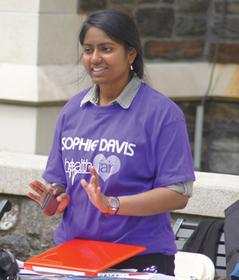 Members of the Sophie Davis School's Class of 2016 will be the first to enter CCNY's new medical school.

In a major development in the institution’s 168-year history, The City College of New York announces the establishment of the CUNY School of Medicine at City College in partnership with Bronx-based St. Barnabas Hospital (which is part of the SBH Health System).

The new Harlem-based medical school, whose first class is scheduled to begin fall 2016, will be an expansion of City College’s Sophie Davis School of Biomedical Education. Established in 1973 on the City College campus, the Sophie Davis School currently offers a unique seven-year BS/MD program that integrates an undergraduate education with the first two years of medical school.

The new medical school on the City College campus builds on the strong record of achievement of the Sophie Davis School of Biomedical Education whose mission is recruiting underrepresented minorities into medicine, increasing medical care in historically underserved communities, and boosting the number of primary care physicians.

“The need for more physicians in many communities in our city, particularly in the communities surrounding City College, remains dire,” she said. “By establishing this resource, City College is both helping to address this critical need and fulfilling a vital community service.”

City College Provost Maurizio Trevisan said the Sophie Davis School, of which he is also dean, is the perfect foundation for the new medical school.

“The new medical school will continue the unique mission by providing young students from diverse backgrounds the opportunity to pursue a medical career that focuses on providing health care to the underserved communities of New York State,” Trevisan added.

“In doing so, the school remains true to the mission of City College founder Townsend Harris, who stated, ‘… Let the children of the rich and the poor take their seats together and know of no distinction….’ ”

“Like City College, we have a congruent mission to provide quality care to underserved communities,” he said. “With our combined resources and commitment, those facing health disparities will have more than good reason to hope.”

Operating on the City College campus in Harlem with its clinical campus at St. Barnabas Hospital, the new school is the only medical school in the CUNY system.

About The City College of New York
Since 1847, The City College of New York has provided low-cost, high-quality education for New Yorkers in a wide variety of disciplines. More than 15,000 students pursue undergraduate and graduate degrees in the College of Liberal Arts and Science; the Bernard and Anne Spitzer School of Architecture; the School of Education; the Grove School of Engineering; the Sophie Davis School of Biomedical Education; and the Colin Powell School for Civic and Global Leadership. U.S. News & World Report, Princeton Review and Forbes all rank City College among the best colleges and universities in the United States.

St. Barnabas Hospital is a 461-bed not-for-profit acute care community hospital with a Level 1 Trauma Center. The Ambulatory Care Center at St. Barnabas Hospital recently received Level 3, the highest level of certification for a patient-centered medical home, a model of care that emphasizes care coordination and communication to transform primary care into “what patients want it to be” (as defined by the National Committee for Quality Assurance, the certifying body).