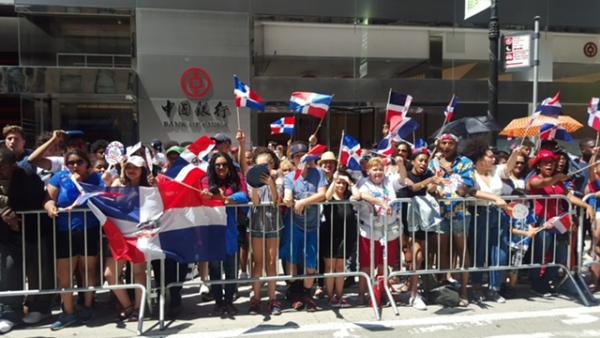 Dominican-Americans are enjoying significant strides in the labor market, according to a study by the Dominican Studies Institute at CCNY.

Dominicans in the United States have made a substantial leap forward in socioeconomic progress over the last two decades concludes a new research report by The City College of New York-based CUNY Dominican Studies Institute (DSI).

The study is co-authored by Ramona Hernández, Director of the DSI; Columbia University economist Francisco L. Rivera-Batiz, and Sidie Sisay, a DSI researcher. It is the first, up-to-date detailed study of the socioeconomic status of Dominicans in the U.S. They used recently-released data from the U.S. Census Bureau.

The average household income per person among Dominicans in 2019, the study finds, was 43 percent higher than in 1999, when adjusted by inflation. This caused a sharp drop of poverty rates as well. In 1999, as much as 27.5 percent of all Dominicans in the U.S. lived in poverty. By 2019 this had dropped to 19.0 percent. Although still unacceptably high, the decline in poverty rates among Dominicans over the last 20 years is the largest of any of the various racial and ethnic groups in the U.S.

The big change, according to the study, centers on labor force participation that’s boosted the employment rates and income gains of Dominicans nationally.

“In fact, Dominican women have the highest female labor force participation rate in the country, higher than the average for any other major racial and ethnic group,” Hernández pointed out.

Still, this Dominican progress in the labor market was tempered by COVID-19 pandemic whose impact was magnified in a group largely represented in the service sector, that was heavily affected by the lockdowns and closures.

Education has been the key driver in this Dominican success story, propelled by the increased schooling of Dominicans born in the United States. According to the study, U.S.-born Dominicans have now surpassed the overall U.S. population in educational attainment. For women, in the period of 2015-2019, as much as 34.6 % of U.S.-born Dominicans had received a college degree and 31.6 % had completed some college education (but not a college degree), which adds up to 66.2 % who had some college education or more. For the overall female population in the U.S., the equivalent proportions are 32.5 % for college graduates and 23.5 % for those with some college, adding up to 56 percent.

"Increased education is intimately connected to higher earnings and lower unemployment,” said study co-author Francisco L. Rivera-Batiz. “The evidence shows that the rate of return to education, particularly to a college education, is high and rising over time. For economic and social development, investing in increased schooling is a slam dunk."

Dominicans are also investing heavily in the human capital of their youth. U.S.-born Dominicans have significantly higher enrollment rates in school or universities than U.S.-born Hispanics in general and all the major Hispanic sub-groups except Cubans.

Other findings of the study are that:

The Dominican population in the U.S. increased from 1,041,910 in 2000 to 2,216,258 in 2020, making them the fifth-largest Hispanic/Latino group in the nation after Mexican Americans/Chicanos, Puerto Ricans, Salvadoreans and Cubans.

The largest concentration of Dominicans continues to be in the state of New York, home of an estimated 897,584 Dominicans in 2020.