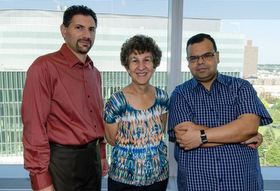 More than $5 million in federal research grants has been awarded to four City College of New York researchers in the interdisciplinary CUNY Institute for Macromolecular Assemblies.

The funding is from the National Institutes of Health (NIH), National Science Foundation (NSF), and Department of Defense (DoD). The recipients, all principal investigators for their respective projects, are:

Professor Ranajeet Ghose, chemistry; $1,024,780 from the NSF for his five-year project, "Conformational Dynamics and Regulatory Interactions in a Bacteriophage RNA Polymerase Complex."

Assistant Professor Reza Khayat, chemistry; $1,373,000 over four years from the NIH SCORE program for the project, "Mechanism of Cellular Recognition and Entry by a Circovirus."

Associate Professor Ronald Koder, physics; four grants totaling $1,655,381 from the NIH, NSF and DoD. Of that, $1,165,493 is a four-year NIH R01 award for his project "Structural and Thermodynamic Features which Govern Enzymatic Nitric Oxide Detoxification."

Professor Koder's other awards are two multiple principal investigator NSF grants (each over three years) of $300,000 and $169,888 for the projects, "Collaborative Research: Creating a Conductive Connection between Redox Enzymes" and "Mechanism and Design of Elastomeric Proteins," respectively.

In addition, Professor Koder received a $20,000 subcontract from Phoebus Optoelectronics tied to a one-year Small Business Innovation Research award from the DoD for the research project, "Innovative Concept for Detection and Identification of Biological Toxins."

Distinguished Professor of Chemistry Ruth Stark, who directs the CUNY Institute for Macromolecular Assemblies (MMA), is the fourth City College grant recipient. She has been awarded $1,142,552 over five years by the NSF for her project "Constructing Plant Cuticle Barriers: From Molecular Architecture to Mechanical Integrity."

Established in 2003, the MMA operates at the interface of chemistry, biology, physics, and engineering disciplines. It comprises 36 faculty-led research teams on eight campuses that address fundamental questions at the frontier of life sciences research.