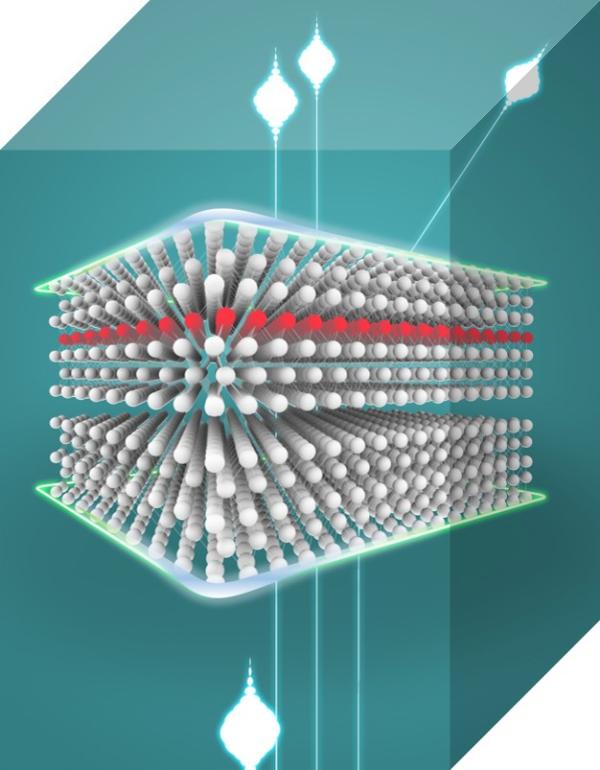 Rendering of a new topological ferromagnet that can be tuned into quantized conductivity state using high-energy electron beams. Image by Lukas Zhao.

A team of international physicists led by Lia Krusin-Elbaum of the City College of New York, has created a new topological magnetic superlattice material, that at a high temperature can  conduct electrical current without dissipation and lost energy. The finding, detailed in a paper published in “Nature Physics,” could be the basis of research leading to an entire new quantum materials class that can potentially provide a platform for error-free quantum computing.

The material in the form of crystals is created in a laboratory chamber. Atoms, in this process, naturally arrange into well-organized layers – a novel ordered magnetic superlattice – which the City College team tests in the Krusin Lab for quantized electrical transport.

The research centers around the Quantum Anomalous Hall Effect (QAHE), which describes an insulator that conducts dissipationless current in discrete channels on its surfaces. Because QAHE current does not lose energy as it travels, it is akin to a superconducting current and has the potential if industrialized to advance energy-efficient technologies.

“The main advance of this work is that the new higher temperature QAHE regime is robust, eminently tunable through electron irradiation and thermal vacancy redistribution, and can be modified on-demand by adjusting the superlattice sequence, leading to a platform for topological superconductivity,” said Krusin-Elbaum, professor in CCNY’s Division of Science.

Krusin-Elbaum and her graduate student Haiming Deng said they can advance this platform to other topological magnets. The ultimate goal would be to help transform future quantum electronics with the material. The CCNY-based Harlem Center for Quantum Materials is a partner in the research. It strives to solve fundamental problems in novel functional materials systems that have vital scientific and technological importance.

The research is supported in part by the National Science Foundation.