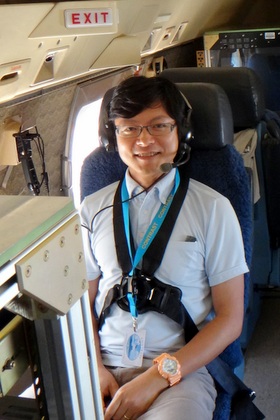 Professor Luo on board the modified Gulfstream V jet used for the CONTRAST mission. 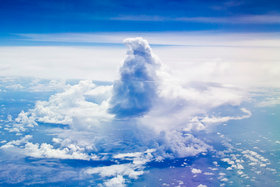 Deep convection cloud over the western Pacific Ocean near the Equator.

Dr. Z. Johnny Luo, associate professor in Department of Earth and Atmospheric Science and NOAA-CREST Institute at The City College of New York, served as a science team member for a recent National Center for Atmospheric Research / National Science Foundations airborne mission to study how the convective clouds the western Pacific Ocean shape climate and air chemistry worldwide. The mission was based on Guam.

The western tropical Pacific has the warmest ocean waters on Earth and the tallest convective clouds. The region feeds heat and moisture into huge clusters of thunderstorms that loft gases and particles into the stratosphere, where they spread out over the entire planet and influence the climate. Because of this, climate scientists often refer to it as the “Warm Pool” or “Global Chimney.”

Professor Luo served previously as a NASA mission team leader and flew into a hurricane.

As a member of the NCAR/NSF mission’s science team, Professor Luo analyzed weather predictions and satellite images to design flight routes that would be carried out the following day. Typically, planes were dispatched from Guam to fly south to near the Equator in search of deep convective clouds.

When they neared the clouds, they would fly at an altitude between 12 and 15 kilometers to identify what biogenic and anthropogenic chemicals reach those heights. Bromine and iodine compounds, which are responsible for the dustruction of the ozone layer, were a particular focus.

The project, called CONTRAST (Convective Transport of Active Species in the Tropics) was funded by NSF. It used a modified Gulfstream V aircraft outfitted with scientific instruments in place of the luxurious furnishings found in the planes used by corporate chieftains and other wealthy individuals. CONTRAST was conducted in coordination with two other Guam-based field missions designed to provide views of air masses over the western Pacific:

By working in tandem, the three aircraft will be able to provide a comprehensive view of the atmosphere from the ocean surface, where gases produced by marine organisms enter the air, to the stratosphere, more than 18 kilometers above. The aim is to obtain detailed information on the chemical composition of the upper atmosphere in order to develop better global climate models and climate change mitigation policies.


About the National Center for Atmospheric Research (NCAR)
NCAR is a federally funded research and development center sponsored by the National Science Foundation and devoted to service, research and education in the atmospheric and related sciences. Other U.S. government agencies, other national governments and the private sector provide significant additional support.