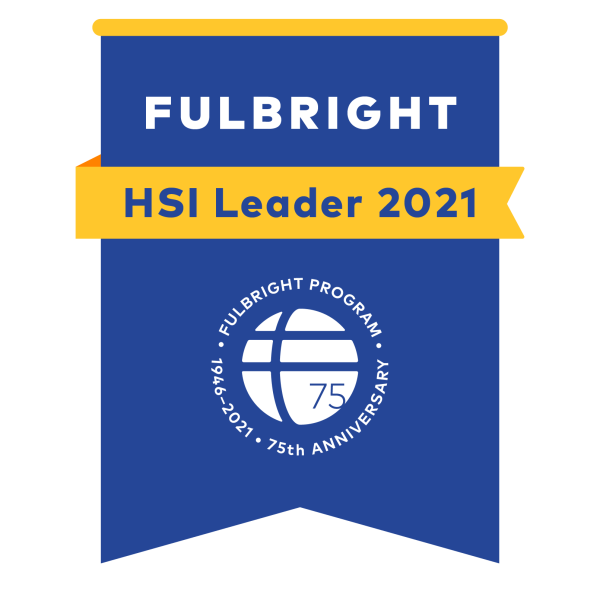 In celebration of the Fulbright Program’s 75th Anniversary, the U.S. Department of State’s Bureau of Educational and Cultural Affairs (ECA) is proclaiming The City College of New York a Fulbright Hispanic–Serving Institution (HSI) Leader in the “Doctoral Institutions” category, along with 17 other colleges and universities nationally. An additional 17 institutions have earned the distinction in the “Associate & Baccalaureate” and in the “Masters” categories.

Some of CCNY’s peers as HSI Leaders in the Doctoral Institutions category include:

“Fulbright HSI Leader status has been conferred on this group of 35 HSIs, including The City College, because they have demonstrated noteworthy engagement with Fulbright exchange participants during the 2019-2021 academic years and have promoted Fulbright Program opportunities on campus,” the ECA said in a statement.

Last summer, Secretary of State Antony Blinken and Secretary of Education Miguel Cardona released a “Joint Statement of Principles in Support of International Education,” which outlines the many benefits of international education and the need for “all Americans to be equipped with global and cultural competencies.” In its inaugural year, the Fulbright HSI Leaders Initiative supports the goals of the Joint Statement, including the principle that U.S. participants in international exchanges should reflect the diversity of the United States.

Speaking on behalf of ECA, which sponsors the Fulbright Program, Deputy Assistant Secretary of State for Academic Programs Ethan Rosenzweig congratulated and thanked the leadership of the designated institutions for recognizing the impact of the Fulbright Program.  “Thank you for creating a campus culture that celebrates the mission of Fulbright and international exchanges. Thank you for epitomizing the principle that mutual understanding between peoples of the United States and other countries will lead to a more just and peaceful society at home.”

Rosenzweig also praised the faculty, staff, and administrators on campus who recruit, advise and support future “Fulbrighters” throughout the application process.

Jennifer Lutton is Fulbright Program Advisor at CCNY in addition to her position as Coordinator of National Scholarships/Fellowship. In 2015, CCNY was named a top producer of Fulbright Scholars by ECA. To apply for a Fulbright at CCNY, email Lutton at jlutton@ccny.cuny.edu

This year marks the 75th Anniversary of the Fulbright Program. Celebrations through December are highlighting the impressive accomplishments and legacy of the program and its alumni over its first 75 years, both in the United States and around the world. Click here for a showcase of Fulbright alumni, partner countries and anniversary events.

About the Fulbright Scholar Program
Established in 1946 under legislation introduced by the late Sen. J. William Fulbright of Arkansas, the program’s purpose is to build mutual understanding between the people of the United States and other countries. Fulbright Scholars are selected on the basis of academic or professional achievement and demonstrated leadership potential in their fields. The U.S. Department of State’s Bureau of Educational and Cultural Affairs manages the program.