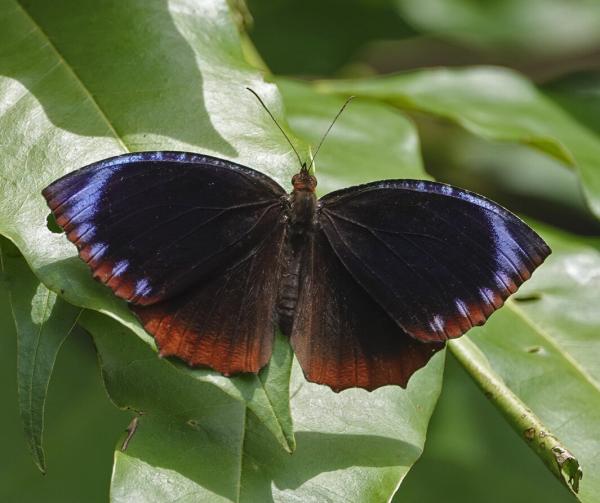 Many animal and insect species use Batesian mimicry – mimicking a poisonous species – as a defense against predators. The common palmfly, Elymnias hypermnestra (a species of satyrine butterfly), which is found throughout wide areas of tropical and subtropical Asia, adds a twist to this evolutionary strategy: the females evolved two distinct forms, either orange or dark brown, imitating two separate poisonous model species, Danaus or Euploea. The males are uniformly brown. A population group is either entirely brown (both males and females) or mixed (brown males and orange females).

City College of New York entomologist David Lohman and his collaborators studied the genome of 45 samples representing 18 subspecies across Asia to determine their evolutionary history and to establish what genes were responsible for the color variation in females. They found that neither the orange nor brown females had a common recent ancestor.

“The conventional wisdom is that once something evolves and you lose it, it’s hard to re-evolve it,” said Lohman. “That suggests something is acting like a switch, switching the gene on or off.”

The researchers found two DNA nucleotides on the Elymnias hypermnestra genome that regulate WntA, a gene associated with color patterning in butterfly species.

The WntA gene can be switched on to recreate the phenotypic shift, even where it hasn’t appeared for several generations. Reaching back into genetic history allows a species to create a variant without having to re-evolve the intermediate biochemical pathways.

“Evolution of a phenotype can be more plastic than we thought,” said Shen-Horn Yen, one of Lohman’s collaborators from the Department of Biological Sciences, National Sun Yat-Sen University, Taiwan.

The study appears in the journal Proceedings of the Royal Society B.

To Lohman, studying Elymnias hypermnestra encapsulates the study of biodiversity in its entirety. There’s a universe of variety in color, form and size and genetic variability all found in a single genus of butterfly.