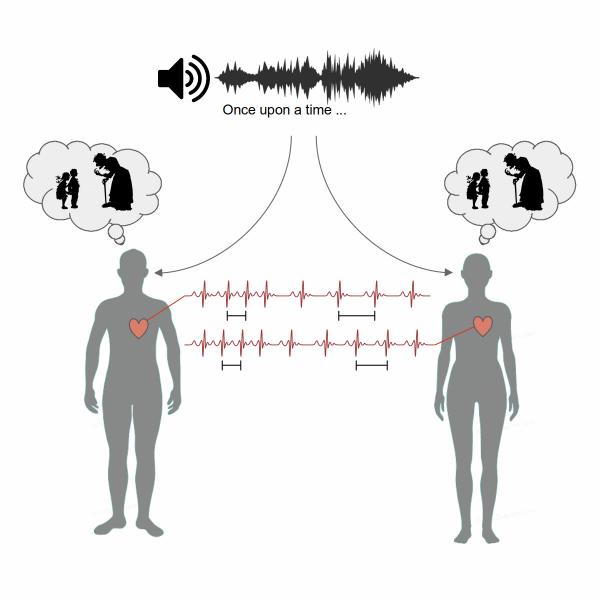 Heart rate naturally fluctuates over time. These fluctuations of heart rate synchronize when individuals listen to the same story.

Heart rate patterns fluctuate under many conditions. Meditation reduces heart rate while being surprised increases it. Listening to stories also affects heart rate. These changes occur synchronously among people listening individually, not only in groups, indicating cognitive processing of the story affects us on a physiological level separate from relational dynamics. Conversely, narratives do not seem to affect respiratory rate. Heart rate pattern changes also occur in patients suffering from disorders of consciousness when audio narratives are played. These fluctuations could be effective indicators of level of consciousness and provide tools for determining prognosis.

City College of New York biomedical engineers Lucas Parra and Jens Madsen, in collaboration with investigators in Paris, France, and Birmingham, England, analyzed electrocardiogram data from four experiments where subjects listened to audio recordings or watched videos. Respiratory patterns were measured in two of the experiments.

In the first experiment, study participants listened to one-minute segments of “20,000 Leagues Under the Sea” to test whether the narrative affected heart rate fluctuation. In the second experiment, they watched three to five- minute instructional videos. In both experiments, heart rates were synchronized between individuals.

When participants viewed the videos a second time while distracted – they were asked to count backwards – heart rate patterns did not correlate. A third experiment offered children’s stories after which participants were asked to recall character names. When distracting sounds were inserted, their heart rates were less synchronized, and their recall diminished.

A final audio experiment measured heart rates of patients suffering from disorders of consciousness. Heart rate changes of two patients correlated with that of healthy volunteers listening to the same stories. One of these patient’s coma condition was improved after six months.

“The brain is part of the body and not an isolated computer. We want to know how physiology interacts with brain,” said Parra.

But the studies show more is at play than physiology.

“People think they react to the world in their particular way. [But] even our hearts react in a very similar way when we listen to short stories. That makes me smile. We’re all human,” said Madsen.

The study appears in the journal Cell Reports.