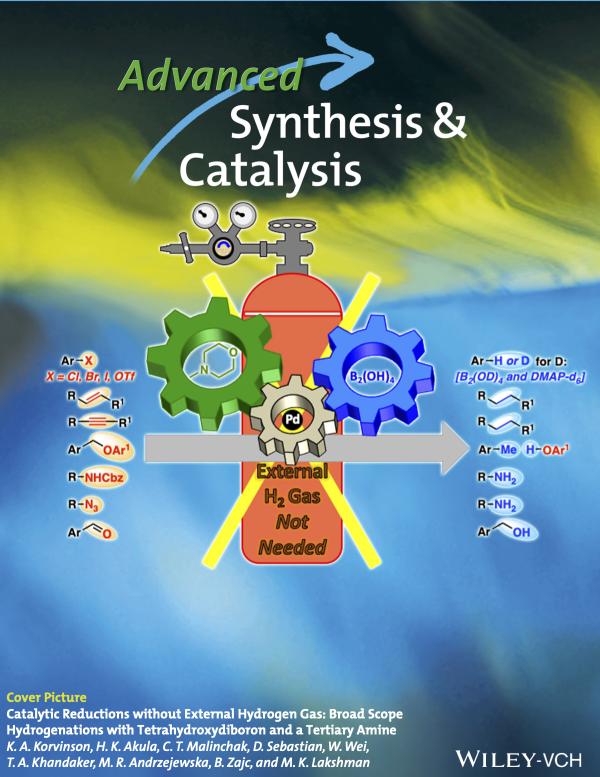 Unique hydrogenation research led by CCNY's Mahesh Lakshman is the inside cover feature in the journal “Advanced Synthesis and Catalysis.”

Safe and environmentally-friendly hydrogen gas on demand could be on the horizon following a new "hydrogenation" chemical process in development at The City College of New York. Led by Mahesh K. Lakshman, the research uniquely bypasses the need for an external source of hydrogen gas to accomplish a wide range of hydrogenations.  It appears as an inside cover feature in the 2020 issue #1 of journal “Advanced Synthesis and Catalysis.”

Lakshman explained hydrogenation as the addition of hydrogen atoms. For instance, a very common application is for the production of fats from vegetable oils. In industry, production of paraffin is an example.

“Hydrogenation is an old and well established method that relies on the use of a finely divided metal such as palladium, often supported on charcoal,” said Lakshman, a Fellow of Britain’s Royal Society of Chemistry and a former vice chair of the Department of Chemistry and Biochemistry. “It also needs a source of hydrogen gas, which to date is available from compressed hydrogen gas cylinders. These compressed hydrogen gas cylinders are not only expensive but they pose an extreme explosion and fire hazard.”

He noted that the destruction of the Zeppelin Hindenburg airship in New Jersey in 1937 was attributed to this.

The research developed in CCNY’s Division of Science eliminates the need for this compressed gas and results in a safer operational procedure.

“What we have found is that we can mix two stable materials together in the presence of palladium on charcoal and this produces a mixture capable of "hydrogenation," without requiring an external source of compressed hydrogen gas,” said Lakshman. “This work was inspired by a publication from the Benjamin Stokes labs at University of California -- Merced. Stokes used water as the source of hydrogen atoms but there were certain things that did not seem achievable under his conditions. Our conditions seem much broader in that many different types of hydrogenations can be accomplished.”

Among its other applications, Lakshman pointed that this new process of hydrogenation could be useful in undergraduate chemistry teaching modules. It would allow labs to dispense with compressed hydrogen gas cylinders.

“In addition, we have also developed conditions for introducing the heavier isotope (deuterium) by understanding the underlying mechanistic aspects. The concept of heavy drugs utilizes deuterium in place of hydrogen to slow down metabolism, with beneficial medicinal applications,” added Lakshman.

Barbara Zajc, also a professor of chemistry at CCNY, collaborated in the research.  A postdoctoral associate, four PhD, one five-year BS/MS and one MS student were involved as well.