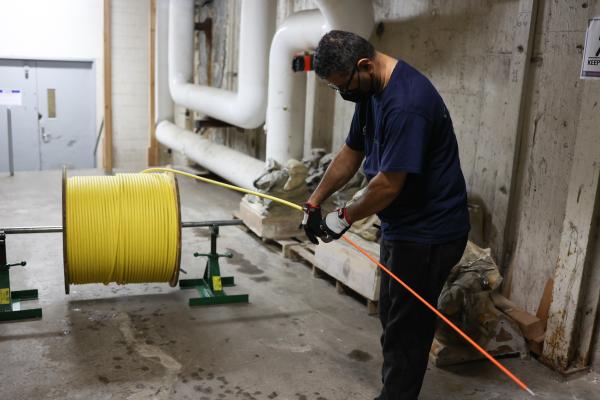 A technician connects CCNY to the fiber network of the COSMOS beyond-5G testbed.

The City College of New York is now directly connected to the COSMOS beyond-5G testbed, which is supported by multi-million dollar investment from the National Science Foundation (NSF). The testbed was created to help U.S. researchers experiment with new methods that will shape and revolutionize the future of wireless networks in smart cities and communities.

COSMOS, in New York City, was one of the first two testbeds to receive funding under the NSF’s Platforms for Advanced Wireless Research (PAWR) initiative. The project is aimed at design, development, and deployment of a city-scale advanced wireless testbed to support real-world experimentation on next-generation wireless technologies and applications.

Designed with a focus on ultra-high bandwidth and low-latency wireless communications, COSMOS is led by researchers at Rutgers, Columbia and NYU, and in partnership with The City College of New York, New York City, Silicon Harlem, IBM and the University of Arizona.

The Federal Communications Commission (FCC) designated the testbed envisioned coverage area (one square mile in West Harlem, with City College to the north, Columbia University’s Morningside Heights campus to the south, and the Hudson River to the west) as one of the nation’s first innovation zones, thereby enabling research institutions and the wireless industry to test new advanced technologies within the designated zone.

The connection to the testbed is enabled by a generous in-kind contribution of dark fiber by Crown Castle that directly connects the testbed facilities at CCNY and Columbia.

“With the number of internet connected devices estimated to have reached more than 46 billion in 2021 – a 200 percent increase since 2016 – it is more important than ever before that we invest in infrastructure that can process all that data in real time,” said Mark Reudink, vice president of technology strategy at Crown Castle. “This test bed will do just that, facilitating important research on technologies that have the potential to change our lives for the better, while also serving as a model for future infrastructure investments on a larger scale.”

The COSMOS testbed creates many opportunities for CCNY students and faculty to learn about high-speed internet communications and experiment with new concepts.

“CCNY faculty, staff and partner companies who have interests in 5G, Internet of Things (IoT), Edge Cloud, Smart City, V2X (Vehicle to Everything) and others can work with our lab and the COSMOS team to experiment their ideas,” said Myung Lee, Co-PI and electrical and computer engineering professor at CCNY. “Currently, several students are working on theories that can be experimented on the COSMOS and COSM-IC (COSMOS Interconnecting Continents) testbeds. For students and the Harlem community, the testbed can be a learning experience for future wireless and high-speed communications.”

One of the projects that CCNY lab students are currently working on is to secure vehicular communication, which will help ensure safety for pedestrians by informing vehicle’s presence to them and allowing the vehicle to automatically control its speed while avoiding collision with people and other vehicles using V2X communication.