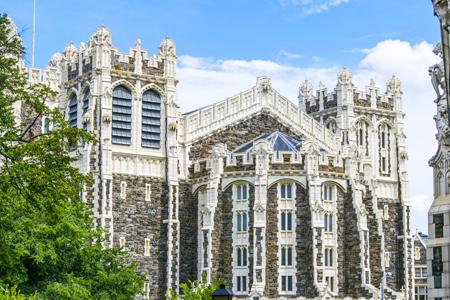 Forbes’ first Covid-era rankings of the nation’s most outstanding schools using a revised methodology maintains The City College of New York’s standing among the best. From an exclusive field of 600 four-year schools drawn from the nearly 2,700 such degree-granting institutions in the U.S., CCNY is #140 overall on the Forbes’ America’s Top Colleges 2021 List. The University of California at Berkeley is #1, the first public school ever ranked so by Forbes.

CCNY placed high in other categories, too. These include: #63  in Public Colleges; #99 in Research Universities; #58 in The Northeast and #84 among America's Best Value Colleges (2019).

Forbes, whose 2020 list was suspended, said it took the pandemic year to re-evaluate its methodology.  “As we watched Covid turn higher education upside down, we realized we needed to update the way we measure the best colleges in America. It isn’t enough to ask which schools give the best return on investment. It’s also important to evaluate what kind of students they educate and whether they make themselves accessible to those who can’t afford high sticker prices,” said the publication.

On the 2021 list, schools placed well if their students graduated on time, secured high salaries and low debt, and went on to have successful careers. Forbes also added several new measures and datasets this year to make its findings even more robust. “We reframed data to better gauge alumni salaries, added a new metric to determine how quickly graduates paid off the cost of college, and accounted for how well schools were serving low-income students. Our new ranking better accounts for which schools are serving as true engines of the American Dream,” it said.

CCNY has consistently placed highly on previous rankings by Forbes, most recently in 2018 and 2016.

Since 1847, The City College of New York has provided a high-quality and affordable education to generations of New Yorkers in a wide variety of disciplines. CCNY embraces its position at the forefront of social change. It is ranked #1 by the Harvard-based Opportunity Insights out of 369 selective public colleges in the United States on the overall mobility index. This measure reflects both access and outcomes, representing the likelihood that a student at CCNY can move up two or more income quintiles. In addition, the Center for World University Rankings places CCNY in the top 1.8% of universities worldwide in terms of academic excellence. Labor analytics firm Emsi puts at $1.9 billion CCNY’s annual economic impact on the regional economy (5 boroughs and 5 adjacent counties) and quantifies the “for dollar” return on investment to students, taxpayers and society. At City College, more than 16,000 students pursue undergraduate and graduate degrees in eight schools and divisions, driven by significant funded research, creativity and scholarship. CCNY is as diverse, dynamic and visionary as New York City itself. View CCNY Media Kit.