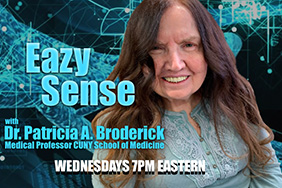 Eazysense with Dr. Patricia Broderick, medical professor at the CUNY School of Medicine, on Wednesdays at 7 p.m. Eastern.

Patricia A. Broderick, inventor, researcher and medical professor in the CUNY School of Medicine at The City College of New York, is the host of “Eazysense” on Bold Brave Media Tune in Radio Talk Show and recently spoke about spinal cord injuries during the Covid-19 pandemic.

“The Covid Brain” focuses on conceptual and empirical leaps into the temporal synchrony of movement, freezing and panic disorders. The episode also focused on what affects movement other than muscles, limbs and spiny interneurons.

As the inventor of The BRODERICK PROBE®, named after her father, and owner of its Trademark worldwide, Broderick developed and patented this series of nanobiosensors as well as the electrical circuits to direct the sensing work of the nanobiosensor. Whereas all patents are assigned to the innovative company she founded, Eazysense Nanotechnologies Inc., in concert with The City University of New York Technology Commercialization Office, a portion of her patents are assigned to New York University.

Based on nano biotechnology, the probes are biomedical-sensing devices, smaller than one strand of human hair. They have proven successful in sensing exact neuronal transmitters in the temporal lobe brain in epilepsy patients, intraoperatively, during surgery performed at New York University’s Tisch Hospital.

She has also written numerous book chapters and peer reviewed prestigious articles in the neurodegenerative and psychiatric as well as sensor journals. Her latest book is “Neuroimaging, Nanosensing Biochemistry in the Brain," (Jenny Stanford Publishing Pte Ltd., Singapore, October 31, 2020).

Eazysense is in its second season and streams live on channel 100 on Wednesdays at 7 p.m., EST. It is syndicated on 16 media networks and platforms including ABC, NBC, CBS as well as on Spotify and YouTube.