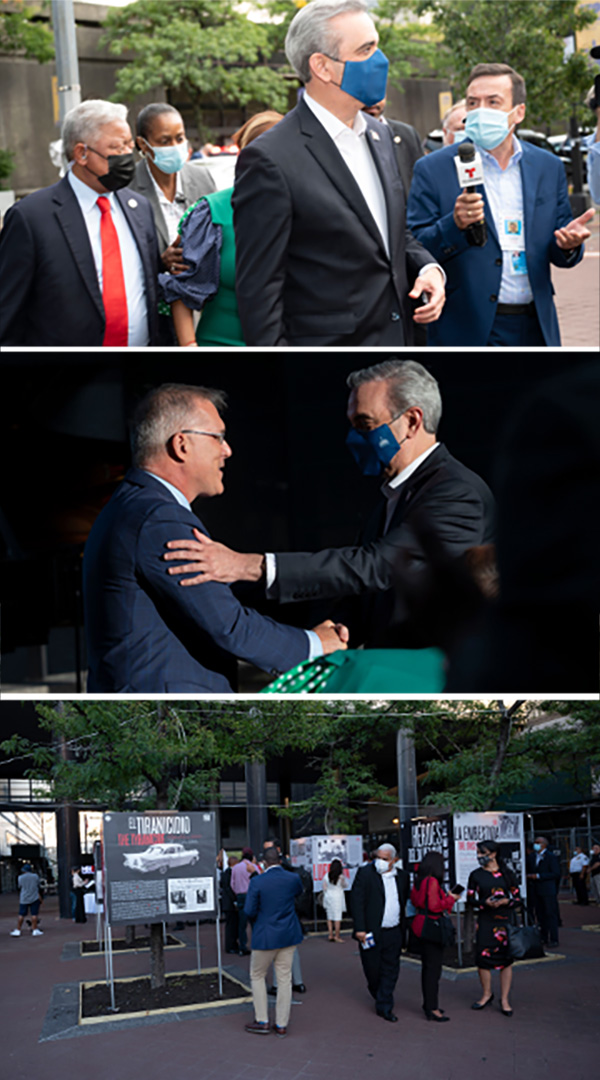 From the top: D.R. President Luis Abinader arrives on the CCNY campus; meets with CCNY President Vincent Boudreau; and part of the "Year of Freedom" outdoor exhibit on campus.

In New York City for the United Nations General Assembly, Luis Abinader, state President of the Dominican Republic, took time off to visit The City College of New York and inaugurate the “1961: Year of Freedom” exhibit that commemorates the end of the Rafael Trujillo dictatorship on the Caribbean Island 60 years ago. Pres. Abinader was joined at the ceremony by City College President Vincent Boudreau.

A free and open-to-the-public photography exhibit on the CCNY campus, “The Year of Freedom” runs through Nov. 30, 2021. It is organized by the Dominican ministries of Culture and Education and curated by Patricia Solano and Juan Miguel Perez. The CCNY-based CUNY Dominican Studies Institute (DSI) is the host.

The exhibit is educational in nature and centers around the year 1961, when the autocratic Rafael Trujillo (1930-1961) was taken down by the Dominican people. 1961 is now an official date in the Dominican Republic and celebrated among Dominicans everywhere, as the year of freedom. The exhibit will feature many never-before-seen photographs, chronologically depicting Dominican resistance during that period.

The exhibit will welcome visits by NYC public schools and professors teaching Dominican/Latino studies courses in CUNY and other institutions.

City College has been the alma mater of generations of graduates born in the D.R. or of Dominican heritage.