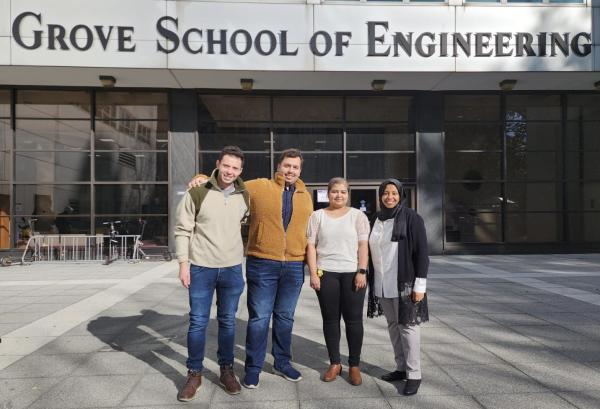 Members of the victorious CCNY Grove School team that placed first in the US and Canada at the global CSAW games at NYU. From left: Facundo Aguirre, Mohammad Walid Charrwi, Vedika Saravanan, and faculty advisor Prof. Samah Saeed.

Making its debut in the CSAW games, CCNY was nominated to the final phase where it competed against the University of Calgary (Canada) and University of Florida. “This is the most comprehensive student-run cyber security event in the world and we were competing against top teams from the United States and Canada region,” said Saeed.

AI vs. Humans is a hardware security challenge contest co-located with CSAW 2022 for defeating artificial intelligence (AI)-based tools developed for hardware security. In the competition, participants can play the role of a defender, attacker, or both. The objective for the attacker is to inject stealthy hardware Trojans that evade state-of-the-art AI-based detection tools. For the defender, the objective is to generate test patterns that detect our AI-generated Trojans.

Participants are encouraged to use tools and techniques of their choice, such as heuristic-based, simulation-based, or even formal tools. In addition, they can be affiliated with either industry or academia.

The competition is designed to mimic real-world scenarios where an attacker can inject Trojans to cause damaging consequences ranging from altering the chip's functionality and leaking sensitive data, such as cryptographic keys, to causing denial-of-service attacks.

The CSAW games are the brainchild of computer scientist Nasir Memon, currently a professor and vice dean for student and academic affairs at NYU. What he founded as a small contest called Cyber Security Awareness Week (CSAW) 20 years ago, has grown to become the most comprehensive set of cybersecurity challenges by and for students around the globe.