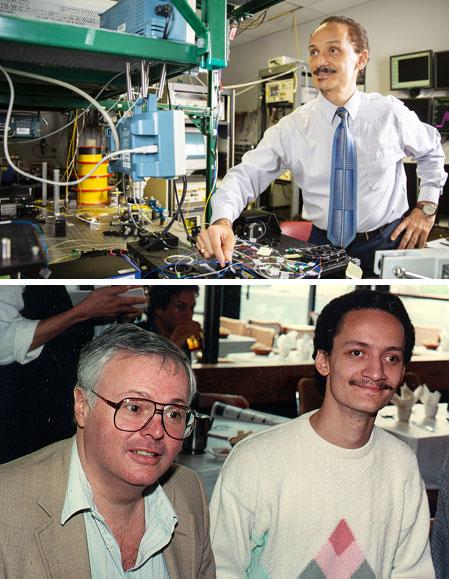 CCNY alumnus Peter Delfyett (above) is the winner of the Arthur L. Schawlow Prize in Laser Science, the highest honor in the field. Below, Delfyett with mentor Robert Alfano at CCNY in 1988.

Peter J. Delfyett, Jr., a 1981 alumnus of The City College of New York and one of the world’s pre-eminent ultrafast photonics researchers, is the winner of the 2021 Arthur L. Schawlow Prize in Laser Science from the American Physical Society (APS). Regarded as the highest accolade in the field, the $10,000 prize recognizes outstanding contributions to basic research which uses lasers to advance the knowledge of the fundamental physical properties of materials and their interaction with light.

Delfyett, who holds 43 US patents, is cited “for pioneering contributions to the development of ultrafast mode-locked semiconductor diode lasers, including the scientific understanding of the underlying physical processes, and their application in ultra-wide bandwidth optical communications and signal processing."

A 2018 recipient of the Townsend Harris Medal, awarded for outstanding post-graduate achievement by the Alumni Association of The City College of New York, Delfyett follows in the footsteps of his undergraduate, doctorate and post-doctorate mentor Robert R. Alfano, Distinguished Professor of Science and Engineering at CCNY, as a Schawlow Prize winner.

Alfano, who has 124 US patents, received the honor in 2013. He hailed the award to Delfyett, whom he called his “science son,” saying: “It’s immensely satisfying to see Peter continue to make enormous strides in our field, and to earn the highest recognition, based on the foundations laid at IUSL at CCNY.”

Delfyett is Pegasus Professor and Trustee Chair Professor of Optics, EE & Physics in CREOL, The College of Optics and Photonics, at the University of Central Florida. He also serves as director of the Townes Laser Institute.  Among his other honors are: Fellow of the APS, IEEE, NAI, NSBP, OSA, and SPIE; recipient of the NSF PECASE Award, the APS Edward Bouchet Award, and the 2020 IEEE Photonics Society’s William Streifer Scientific Achievement Award.

In addition to his 43 patents, Delfyett has over 800 scientific publications in refereed journals and conference proceedings.