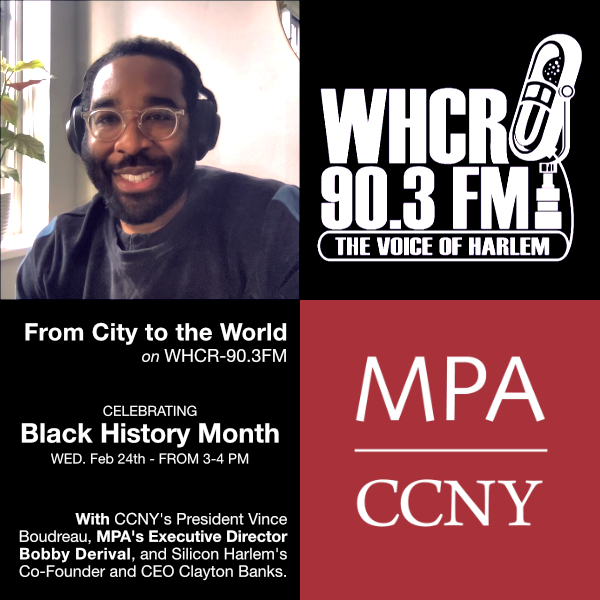 Connecting to the community is one of the four pillars of the MPA program's work. This week, Executive Director Bobby Derival spoke on WHCR 90.3 FM Radio, The Voice of Harlem, as a featured guest on the program From City to the World hosted by CCNY President Vincent Boudreau.

Derival engaged in a dialogue with President Boudreau and Clayton Banks, the co-founder and CEO of Silicon Harlem. In the context of Black History Month, the three leaders discussed the disparity in access to technology, educational opportunity, and public health in Harlem and explored potential solutions to these social problems.

Derival emphasized the need to build community and forge connections both within and beyond the college and to cultivate new social justice leadership - a central part of the MPA Program's mission.

Banks spoke of the need to demystify technology and make it accessible to everyone, an effort in which Silicon Harlem is leading the way. He also emphasized Harlem's lesser known history as a launchpad for innovations in science and technology.

The program was in itself an opportunity to build relationships between leaders both on-campus and in the Harlem community, bringing together Derival and Banks to discuss some of the most pressing public issues of our time.

From City to the World airs on the third Wednesday of every month at 3:00 PM. Listen to the program on President Boudreau's podcast.