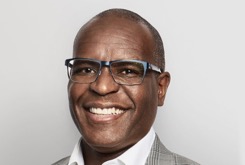 Kirk McDonald, CEO of GroupM North America and CCNY alumnus, is the newest member of the BIC graduate program Board of Advisors.

Kirk McDonald, CEO of GroupM North America, is the newest member of The City College of New York’s Branding + Integrated Communications (BIC) graduate program Board of Advisors. His advisory role comes at a pivotal moment in the program as BIC launches its new Media track in fall of 2022.

Recently named by “AdWeek” as one of “50 vital leaders in tech, media and marketing,” Kirk not only brings over 25 years of industry expertise working with the world’s leading brands, media companies and technology providers, but the passion of a City College alumnus.  BIC Program Director Nancy R. Tag is “thrilled to be able to tap into Kirk’s energy and know-how as we elevate the study of media to a graduate level and as part of an integrated communications model.”

In his role at GroupM, Kirk is responsible for strategy and operations in the world’s largest region across GroupM’s brands, including Mindshare, MediaCom, Wavemaker, Essence, m/Six and Xaxis. As a member of GroupM’s Global Leadership Team, Kirk is a
key player in driving real change across the industry to find a new balance of making advertising less interruptive and a valued part of the media experience.

GroupM is one of the largest and most influential media-buying operations in the industry, managing about $17.6 billion in media billings across the U.S. and Canada. Former CEO Rob Norman has been a BIC Board Advisor and guest lecturer since the BIC program launched in 2013.

Prior to GroupM, Kirk served as chief business officer at WarnerMedia’s Xandr where he oversaw the go-to market functions including sales, communications, product marketing and marketing strategy/execution after holding the role of chief marketing officer for nearly two years. Kirk was also president of PubMatic, the marketing automation software company, as well as held roles with Time Inc., Fortune|Money Group and CNET Networks, among others.

Throughout his career, Kirk received many accolades including being named to “Ebony Magazine’s” Power 100 list in 2018, “Adweek’s” 2014 “12 Stars of Ad Tech Who are Building the Future of the Industry Right Now” list and “Business Insider’s” 2014 “The 46 Most Important African-Americans in Technology” list, among others.

Kirk currently serves on the Board of Directors for Elanco (NYSE: ELAN) and is a member of the prestigious Executive Leadership Council. He also serves on several other professional and not-for-profit boards including the Ad Council, Advertising Week Advisory Council, and is the co-chair of MOUSE/CI. An alumnus of The City College of New York, Kirk majored in English as an undergraduate.