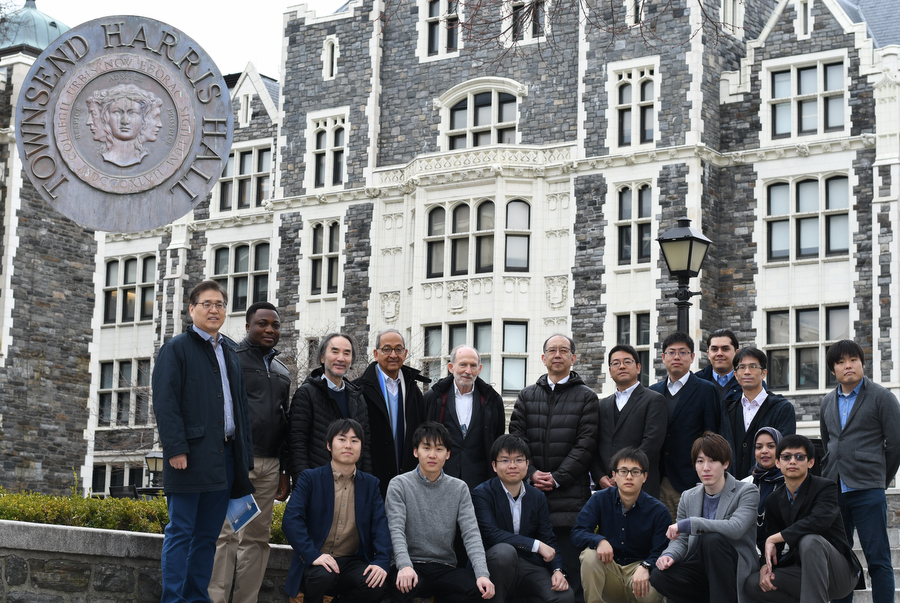 City College Internet researchers and their counterparts from Japan's Kyushu Institute of Technology outside CCNY's Grove School of Engineering.

The City College of New York’s Grove School of Engineering and Japan’s Kyushu Institute of Technology (Kyutech) are working together on a unique project to make the future Internet more secure and resilient.

A joint team from the two schools is working on a $450,000 National Science Foundation (NSF) funded project entitled: “JUNO2: Resilient Edge Cloud Designed Networks” to define the future of the Internet.

“The grant focuses on addressing research challenges associated with enabling trustworthy networks supporting the Internet of Things (IoT), which encompasses everything connected to the Internet, and cyber-physical systems (CPS), which is a mechanism that is controlled or monitored by computer-based algorithms,” said Tarek Saadawi, principal investigator and professor of electrical engineering in the Grove School.

“The IoT and CPS are becoming prevalent in everyday life, enabling a wide array of related emerging services and applications in cities and communities, including health, transportation, energy, utilities and other areas,” he added.

The joint CCNY- Kyutech team comprises professors and students at the PhD, graduate and undergraduate levels from both schools. In their most recent meeting held at the Grove School, five professors and six students from Kyutech spent three days with their counterparts at CCNY. In addition to Saadawi, Grove School faculty involved in the research are Akira Kawaguchi, Myung Lee and Abbe Mowshowitz.

The collaborators reviewed details of the project and worked on different tasks required. In addition, CCNY students gave presentations and lab demos and the Kyutech students held a poster session focusing on some of the challenges encountered.