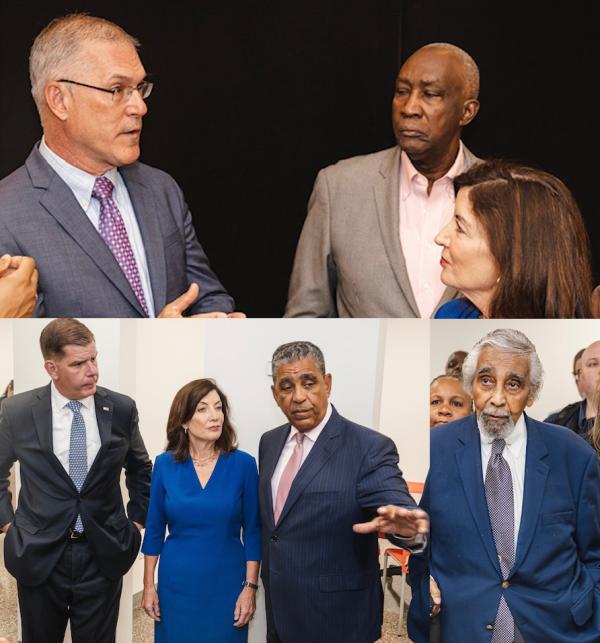 Launched this spring with $1.5 million in federal funding, $1.5 million in state funding, and an initial lead award of $400,000 from CUNY, the initiative named for retired U.S. Representative Charles B. Rangel and designed to serve his old congressional district, is joining in the Second Avenue Subway Phase II construction project, providing workforce and training opportunities. Other forthcoming opportunities include the Gateway Program and the $1.2 trillion Infrastructure Bill passed by Congress.

“This is very much top of the line in terms of an opportunity, using this outstanding educational institution to be the vehicle to transport young people to a better future. And how do we do that? We train them in infrastructure jobs,” Hochul said on a tour of RIWI, along with Walsh, Rangel, Congressman Adriano Espaillat (NY-13), CCNY President Vincent Boudreau and other officials.

“I’m very excited about this and thank you for taking the lead,” she told Boudreau.

Walsh praised the initiative and added: “When we think about where we are in the United States of America, Congress is active, (Senator Chuck) Schumer has done an amazing job passing these bills, and now it’s really down to The City College to make sure we are preparing young people to access those jobs.”

Said Boudreau: “This initiative harnesses our expertise in engineering, architecture and sustainability to the needs of the moment more directly than ever before. America must mobilize to accomplish the reconstruction of our infrastructure and that mobilization is a great opportunity to develop a more representative workforce.  I’m pleased that CCNY is equipped to answer the call, and so grateful to Congressman Espaillat, Governor Hochul and Congressman Rangel for their faith and support.”

A trailblazer who left the House of Representatives in 2017 with a huge legacy in his relentless push for inner city development, Rangel called RIWI a national model for similar programs.

He said having an initiative at CCNY that offers young people an affordable academic option to attain the training for careers in fields of transportation and infrastructure development will give equity opportunity in an often-overlooked community.

“Now that students will be able to commence  their studies here is a great step in developing a workforce attuned to the needs of the future, especially among the underserved, under-educated and under-employed,” Rangel, a statesman-in-residence at City, added. “This initiative is an exciting model for like-programs in academic institutions throughout the country. A great step for students and a truly exciting program for the future.”

Espaillat, Rangel’s successor as 13th Congressional District U.S. Representative, has been instrumental in RIWI coming to fruition. The initial $1.5 million in federal support was part of the $11.5 million package in community project funding secured by Espaillat. He’s also secured $2.2 million for the FY23 cycle.

"Our federal, state, and nonprofit partnerships have worked collaboratively to boost the local economy, and under Secretary Walsh’s leadership, we have seen record low unemployment and record job growth,” Espaillat said. “I am delighted to welcome Secretary Walsh and Governor Hochul to see all the important initiatives and innovative labor hubs in my district."

RIWI is the brainchild of Dr. Robert E. Paaswell, Distinguished Professor of Civil Engineering in CCNY’s Grove School of Engineering, in response to Rangel’s desire for modern infrastructure jobs in the 13th Congressional district. It  will equip historically underserved communities with analytical and operational skills through innovative curricula, simulation-based training, and experiential learning to help them pursue career paths in the rapidly changing urban infrastructure sector.

“Achieving sustainability, equity, and resilience across the nation’s broad infrastructure will require not only substantial capital investments but investments in human skills and knowledge at a local level,” said Paaswell. “RIWI will train historically underserved communities with adaptive 21st century skills and, through partnerships with trade organizations and industry, develop new pipelines to good, green jobs.”

Paaswell and Michael Bobker, Director of the CCNY-based CUNY Institute for Urban Systems’ Building Performance Lab, developed RIWI’s unique strategy and content and recently welcomed its new Interim Director, Professor Angelo Lampousis, who will lead the continuation of the initial pilot and the comprehensive rollout of the full curriculum this fall.

The tour of RIWI by Hochul and Walsh is part of a series of visits arranged by Espaillat to projects he's been an advocate for in his Congressional District.