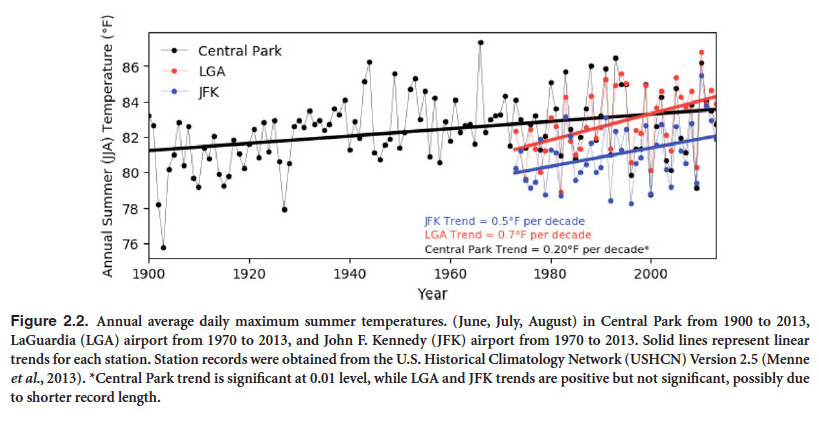 New Yorkers can brace for rising temperatures, increasing precipitation and rapidly rising sea levels in the years to come. That’s the finding by City College of New York experts in a study presented to the Mayor’s Office of Recovery & Resiliency for planning and investment purposes. CCNY’s contribution to the New York City Panel on Climate Change (NPCC) 2019 report is based on nearly four years of research.

Their key findings include:

Further, they found that annual temperature and precipitation increases were reaffirming previous projections from the second NPCC report for the 2020s.

“We confirmed that it’s happening so it means that it’s getting warmer,” said Gonzalez, who’s been a member of the panel since 2015.

Gonzalez, Devineni, Rivera, Ravindranath and Ortiz are from CCNY’s Grove School of Engineering that is celebrating its centennial. Booth is from the Division of Science.

About the New York Panel on Climate Change
Understanding climate change in cities is important because of the dramatic growth in urban populations and thus vulnerability, as well as the emerging role of cities as first responders to climate change. Since 2008, the New York Panel on Climate Change (NPCC) has analyzed climate trends, developed projections, explored key impacts, and advised on response strategies. Charting a future course for the NPCC ensures that NYC continues to play its role as a climate change leader for other cities, not only in the United States but around the world.