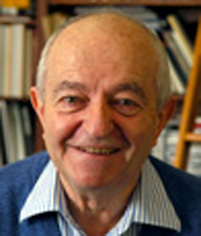 "FROM BACTERIA TO ARTIFICIAL CELLS.
THE PROBLEM OF SELF REPRODUCTION"

Abstract:
1) Can we synthesize the most elementary cell size compartment that can self reproduce using genetic information. This would follow Von Neumann logic for self reproduction.

2) Failed self reproducion of E.coli bacterium by applying a high hydrostatic pressure and study of its recovery.

When considered from a broad perspective, many events that appear to occur at random, such as weather systems, are in fact part of recurring patterns and as such are subject to mathematical principles. Dr. Libchaber applies a type of mathematics called nonlinear dynamics to biological systems in order to understand how an object and its surrounding environment act on one another to provide a specific result.

Dr. Libchaber studies mathematical patterns in biology at the organismal, cellular and molecular levels. At the organismal level, his work examines the interactions and dynamics between organism and environment, including the effects of moving boundary conditions on fluid flow. A moving fish, for example, involves a complicated interaction of a dynamic object with the surrounding fluid, with forces by both elements acting on one another. In the lab, Dr. Libchaber, in collaboration with researchers at New York University’s Courant Institute of Mathematical Sciences, studied a system of flexible filaments in a flowing soap film, which mimics a fish moving in water. Working with Escherichia coli bacteria, Dr. Libchaber has recently shown how temperature and oxygen gradients as well as bacterial concentrations finely tune and control the bacteria’s motility and genetics. The research firmly established that an organism’s environment affects its genes and behavior.

Dr. Libchaber’s lab has also undertaken a series of experiments at the single-molecule level to define the minimal conditions needed to produce an artificial cell. Within a phospholipid vesicle, which mimics a cell membrane, Dr. Libchaber places DNA containing the necessary genes and their regulatory sequences. This cell, which is in contact with a feeding solution through its semipermeable membrane, is then the environment for testing different gene networks and elementary logic circuits for their ability to reproduce essential events in a cell’s life, such as producing proteins and transporting them to the cell’s surface. The research may hold clues to the origin of life, and the ultimate aim is to produce an artificial cell that selfreproduces following a genetic program.

Another important concept concerning the origin of life is the development of a genetic code that relates the 20-amino acid world to the four-nucleotide one. Dr. Libchaber has recently shown that an RNA molecule of a stem-loop structure, acting as a ribozyme, can load an amino acid to its 3' end. This amino acid corresponds to the anticodon in the loop, and this whole process can be done without enzymes.

Past research in Dr. Libchaber’s lab has elucidated the effects of temperature on DNA. In a detailed study on the effects of thermophoresis on DNA in solution, they found that when far infrared lights are focused on the center of a chamber, DNA within the chamber moves from a hot region to a cold one. As the heat is increased, however, convection sets in and causes the opposite: The DNA collects and accumulates in the bottom center of the chamber. Because this phenomenon could be used to sustain very high concentrations of DNA or proteins, it sheds light on how critical concentrations of DNA may have been reached amid early primordial-soup chain reactions and therefore played an important role in early life forms. Then the laboratory showed that polymerase chain reaction, DNA amplification, is essentially a thermal convection process.

Born in Paris, Dr. Libchaber received his undergraduate degree in mathematics from the University of Paris in 1956. In 1959 he received his M.S. in physics from the University of Illinois and in 1965 earned his Ph.D. in physics from the École Normale Supérieure at the University of Paris. Dr. Libchaber was a member of the technical staff at the Bell Telephone Laboratory from 1965 to 1966 and was invited back for each of the next five consecutive summers, from 1967 to 1972. In 1974 he became research director at the French National Center of Scientific Research in Paris. He moved to the University of Chicago’s department of physics and James Franck and Enrico Fermi Institutes as a professor in 1983. From 1991 to 1994 he was a professor in the department of physics at Princeton University, before coming to Rockefeller in 1994.

In 1999 Dr. Libchaber was awarded the Prix des Trois Physiciens from the Foundation of France. He received both the Wolf Foundation Prize in Physics and a John D. and Catherine T. MacArthur Foundation Fellowship in 1986. He is a member of the French Academy of Sciences, the American Academy of Arts and Sciences and the National Academy of Sciences.

PHYSICS SYMPOSIUM IN HONOR OF THE WORK AND LIFE OF
HERMAN Z. CUMMINS, 1933-2010
DISTINGUISHED PROFESSOR OF PHYSICS 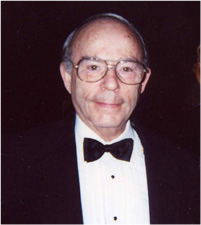 Herman Z. Cummins joined the Physics Department of City College in 1974 as Distinguished Professor of Physics, and immediately established his laser spectroscopy laboratory as one of the leading research sites in the world. His cutting-edge investigations cover: statistics of radiation-matter interactions, as well as elastic, quasi-elastic and inelastic light scattering (Rayleigh, Brillouin and Raman). His many seminal studies have elucidated the physical mechanisms in diverse areas: paraelectricferroelectric phase transitions, commensurate-incommensurate transitions, exciton and polariton formation and dynamics, liquidglass and colloidal systems, and many more.

Prior to joining the City College he was Professor of Physics at Johns Hopkins University and then at New York University. These academic positions followed his PhD and postdoctoral appointments at Columbia University under the mentorship of Professor Charles Townes (Nobel Laureate). Herman Z. Cummins was born on April 23, 1933 in Rochester New York, completed undergraduate work at Ohio State University, and as a Fulbright Scholar at the Universite de Paris. He and Marsha Z. Hirsch were married in 1963. In celebrating his 75th Birthday all his friends and colleagues joined in a sentiment expressed by Professor Townes at his 60th birthday celebration – "May his light continue to shine brightly on the world of physics and on his many friends".