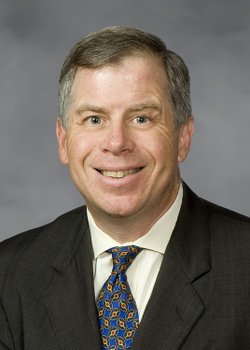 Title: "Banking on Physics"
Abstract: Would the world be better if physicists ran the banks?  Certainly it’s worth a try!  The Credit Crisis beginning in 2007 is merely the latest historical event to demonstrate the inherent fragility of national and global banking systems.  Applying the perspective of “a physicist seeking truth,” we diagnose core problems of banking and propose simple and drastic reforms.

This lecture discusses “physicists in finance” at a general level portraying both successes and failures.  Ironically, what many perceive as physicists’ greatest strength – building sophisticated models – is actually our failure.  To give substance, context, and examples, we describe the investigation into the death of Lehman Brothers and the larger topic of the structural flaws of banking and how to fix them.


JOSEPH PIMBLEY earned a Ph.D. in theoretical physics from the Rensselaer Polytechnic Institute concurrently with his full-time role as a semiconductor device physicist at the GE Corporate Research & Development Laboratory.  He then migrated to a position of assistant professor of mathematical sciences with contributions, publications, and patents in the fields of numerical methods, signal processing, and nuclear, chemical, and electrical engineering.

After 13 years of physics, math, and engineering, Joe pivoted to the financial world.  After years of exposure to almost all of the challenges of the capital markets, Joe became a lead investigator for the Lehman bankruptcy court to determine causes of history’s largest bankruptcy.  His work yielded important findings for funding, leverage, collateral, liquidity, and valuation challenges that led to the Lehman failure and the resulting Crisis.  With his co-author, Joe published “the physicist’s guide to fixing banking:”  Banking on Failure – Fixing the Fiasco of Junk Banks, Government Bailouts, and Fiat Money.