Skip to main content
< Home / Office of the President / Uprising in Context: The Struggle for Racial Justice in the United States

Uprising in Context: The Struggle for Racial Justice in the United States 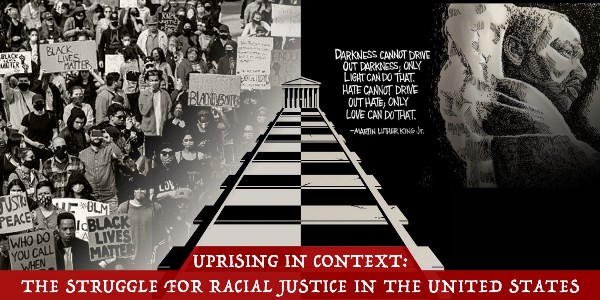 We invite you to Uprising in Context: The Struggle for Racial Justice in the United States, an important conversation about this moment of protest and the movements for racial justice and systemic change, on Tuesday, June 9th at 1 PM on Zoom.

The unwarranted death of yet another one of our Black citizens at the hands of a police officer has sparked a torrent of national protest and public demonstration. For some, the pain of racial injustice is visceral.  it presents itself both overtly and covertly. Many others experience this pain from a distance – obscured either by privilege, ambivalence, or ignorance. Maddeningly common is the degree to which racial injustice manifests as racial violence – systematized by the very institutions that serve to protect our civic spaces. The recent televised uprisings, of which we are now too accustomed, grip our collective consciousness and shake us awake. Join us for a conversation about this moment and the way forward as a community.

The conversation will feature:

We hope you can join us on Tuesday.