The Paper has a long, colorful and respected legacy. It was first created in the late 60s by a group of African-American students at City College. Back issues of the publication are currently being digitized for research, thanks to the support and energy of some of these original contributors.

First called “Tech News,” The Paper was born in a very turbulent period of the country, featuring the Civil Rights movement, Vietnam and anti-war demonstrations, and fights for student rights–at City College, CUNY and all over the country.

With a period so rich in social upheaval, The Paper sought to report issues not covered in traditional college newspapers (though some of that was done), or indeed the mainstream press. News coverage ranged from community issues to national and international news, the arts (there was a movie and theatre critic, and a poet-in-residence). 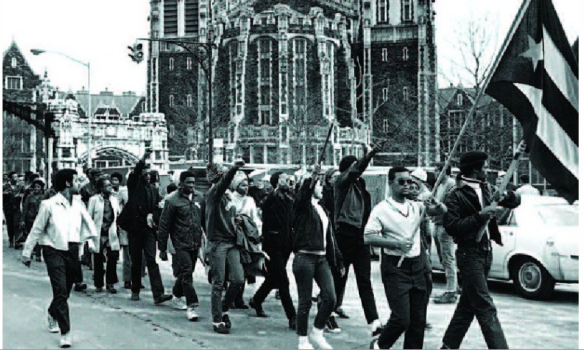 The Paper produced some amazing journalism and was able to “break” several news stories before the mainstream press. In 1971, David Friedlander broke the true story of the uprising at the Attica prison several weeks before the New York Times. Similarly, The Paper broke the story of the 1970 student takeover of the CCNY campus to protest the US invasion of Cambodia. Arlette Hecht wrote a story on the Rockefeller drug laws, an article released simultaneously with a published article in the New York Times and NY Daily News (quite a feat for a college weekly publication).

The Paper also published in depth articles, such as a seminal piece on drugs and their flow into the US. This was important at that time (as it is now) because of the heroin epidemic plaguing Harlem and other black communities.

Right now we need contributors, so please reach out to thepaper@ccny.cuny.edu  if you’d like to write, edit, take photographs or help design the publication. Or stop by the office on the first floor of the NAC 1/118. Click here for the publication website.