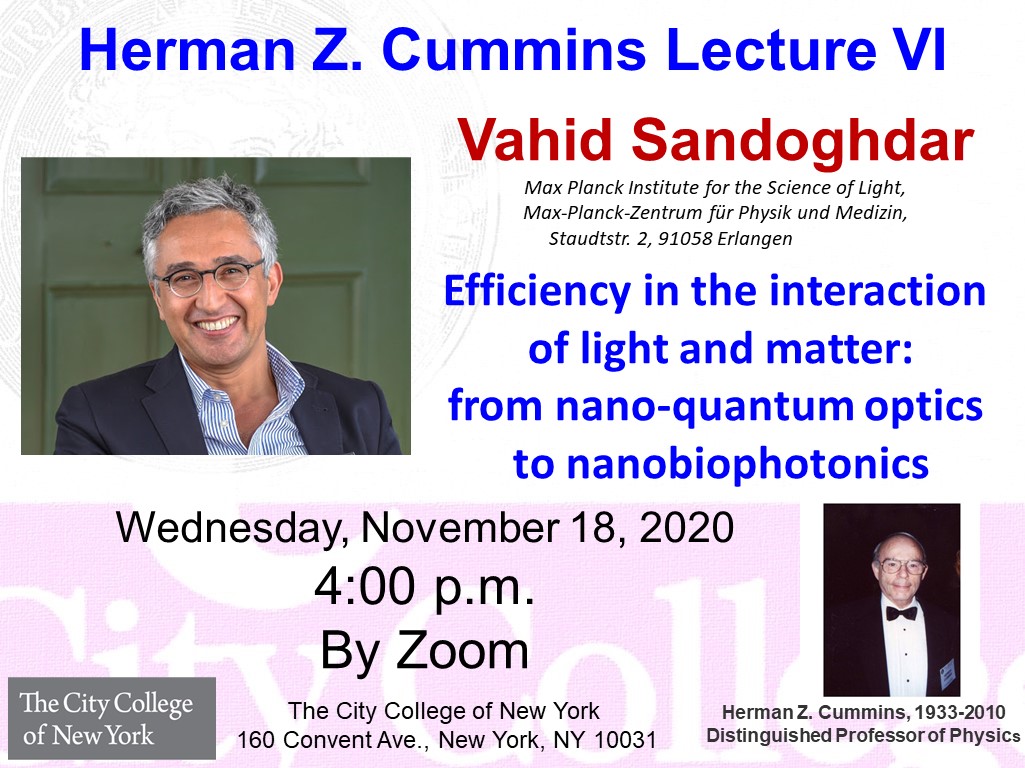 Light-matter interaction at the nanometer scale lies at the heart of elementary optical processes such as absorption, emission or scattering. Over the past two decades, we have realized a series of experiments to investigate the interaction of single photons, single molecules and single nanoparticles. In this presentation, I will report on recent studies, where we reach unity efficiency in the coupling of single photons to single molecules and describe our efforts to exploit this for the realization of polaritonic states involving a controlled number of molecules and photons. Furthermore, I will show how the underlying mechanisms that play a central role in quantum optics, help image and track single biological nanoparticles such as viruses and small proteins with high spatial and temporal resolutions.

Vahid Sandoghdar
Prof. Sandoghdar is one of the world’s leading scientists in nano-optics, a field to which he has added "single-molecule" nanophotonics. The experimental techniques he introduced were also highly influential in physical chemistry, biophysics, optical microscopy and quantum optics. Prof. Dr. Sandoghdar has made several seminal contributions to the field of nano quantum optics, a field that he developed almost from scratch. Born in Iran in 1966, he received the doctorate from Yale University New Haven, Connecticut, USA in 1993. He worked from 1993 to 1995 at the École normale supérieure in Paris, France, followed by a stint at the University of Konstanz, Germany (1995 - 2001) and from 2001 as Full Professor at the Swiss Federal Institute of Technology (ETH) Zurich, Switzerland. In March 2011, he became an Alexander von Humboldt Professor, Director of the Max Planck Institute for the Science of Light in Erlangen and holder of the Chair in Nano-optics, Plasmonics and Biophotonics in the Department of Physics at the University of Erlangen-Nürnberg.

Herman Z Cummins
Prof. Cummins (1933 – 2010) joined the Physics Department of City College in 1974 as a Distinguished Professor of Physics. His cutting-edge investigations cover statistics of radiation-matter interactions, as well as elastic, quasi-elastic and inelastic light scattering (Rayleigh, Brillouin and Raman). His seminal studies elucidated physical mechanisms in diverse areas, such as, paraelectric-ferroelectric phase transitions, commensurate-incommensurate transitions, exciton and polariton formation and dynamics, liquid glass and colloidal systems. He received numerous honors for his scientific contributions. He was elected a Member of the US National Academy of Sciences (1996); a Fellow of the American Academy of Arts & Sciences (2001), and to the Johns Hopkins Society of Scholars (2010). He was awarded the Docteur es Sciences, honoris causa, by the Universite de Paris, and a Senior Fellowship by the Humboldt Foundation. Earlier he received the Alfred P. Sloan Research Fellowship (1969- 72), Guggenheim Fellowship (1984), and was elected Fellow of the American Physical Society and the New York Academy of Sciences.