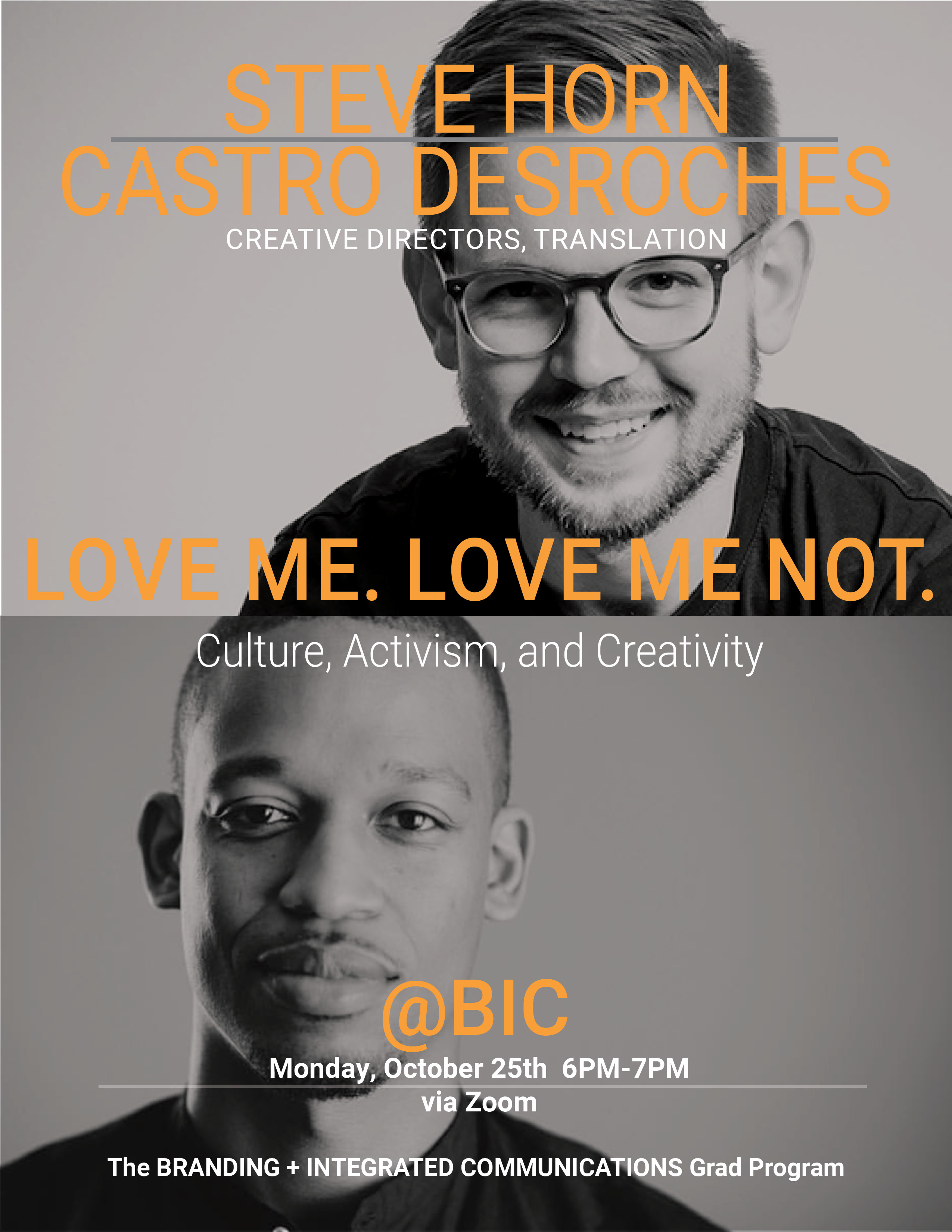 BIC welcomes Steve Horn and Castro Desroches for "LOVE ME. LOVE ME NOT: Culture, Activism, and Creativity," our first @BIC Lecture this Fall 2021 semester. Join us for a talk about Steve and Castro's (BIC ’16) powerful campaign for Beats by Dre asks America this thought-provoking question: “You love Black culture. But do you love Black people?” The campaign, which was directed by Melina Matsoukas (Queen & Slim) with music by Solange Knowles, not only cleaned up at the 2021 award shows, receiving a Grand Clio, Cannes Titanium Lion, seven ONE Show Gold Pencils, etc., but has changed the cultural conversation.

Hear how activism informs the creative work of Steve and Castro — and vice versa. Curious?

Steve Horn Steve Horn attended school at the University of Wisconsin-Madison where he double majored in Journalism & Political Science. He is an Emmy-nominated Copywriter, Creative Director living and working in Brooklyn. Some of his notable clients include Beats by Dre, the NBA, Kitchen Aid, Maytag, and Whirlpool. When not writing words, he's probably drawing, hooping, cooking, or walking many miles across the boroughs. He might also be building a website for a small business, designing a logo for a buddy, consulting on some other creative project, or marrying off lovers with his ordained ministry powers.

Castro Desroches graduated from The City College of New York’s master’s program in Branding + Integrated Communications (BIC). He snagged a job at Droga5 right after graduation when his portfolio was featured in an AdWeek article titled “This Art Director Put His Entire Portfolio on Instagram.” Castro's impressive resume includes a number of high profile spots for Beats by Dre, Rivian Twizzlers, Under Armour, Prudential, Google, Instagram Portfolio, Viral Status, “Ezra” and Mozilla Firefox. He’s the recipient of nearly every industry award, including the Cannes Lion, Clio, D&AD, and ONE Show. Last Spring, he was a professor in the BIC program.