Review: Literature and Arts of the Americas Digital Brazil: Voices of Resistance 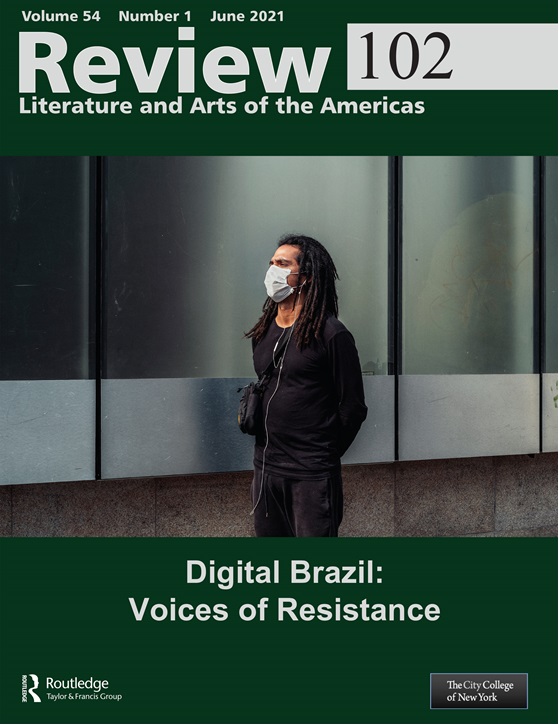 The Department of Classical and Modern Languages & Literatures, the M.A. Program in Spanish, and Routledge, Taylor & Francis Group are pleased to invite the general public to the VIRTUAL Launch of Review: Literature and Arts of the Americas Digital Brazil: Voices of Resistance (no. 102, June 2021)

The event will be led by Daniel Shapiro, Editor; with comments by Elizabeth Lowe, Guest Editor; and comments/readings by authors and scholars J.P. Cuenca, Paulo Dutra, Noemi Jaffe, Leila Lehnen, Cristina Pinto-Bailey, and Cristiane Sobral. The speakers will read bilingual selections of their texts in the issue.

Review 102, “Digital Brazil: Voices of Resistance,” guest-edited by Elizabeth Lowe (New York University), compiles texts originally produced / circulated via social media, blogs, and other digital platforms, as well as through print media. The contents explore themes relevant to the political, economic, environmental, and social challenges in Brazil today. The essays and literature in the issue, as discussed in Prof. Lowe’s introduction, include critical essays, respectively, by Cristina Ferreira Pinto-Bailey on “Black Brazilian Feminisms,” by Paulo Dutra on “Resistance and Dissidence,” and by Leila Lehnen on “Decolonizing Fictions” in Afrofuturism; as well as fiction, non-fiction, poetry, and blogs by a breadth of “voices of resistance.” Among the writers showcased are Fabricio Corsaletti, J.P. Cuenca, Dutra, Conceição Evaristo, Noemi Jaffe, Fábio Kabral, and Cristiane Sobral. In memorial pieces, Nélida Piñon and Paula Parisot reflect on the late author Rubem Fonseca. Special Features include poetry and art by Salgado Maranhão and the late Will Barnet; an interview, by Jerry Carlson, of author Senel Paz; and poems by Mariela Dreyfus. The issue concludes with reviews of Raquel Chang-Rodríguez and Carlos Riobó’s Talking Books with Mario Vargas Llosa, The Collected Stories of Juan Carlos Onetti, and of other titles by writers from across the hemisphere.

Grateful acknowledgment is made to CCNY’s Division of Humanities and the Arts for its generous support of Review.

Daniel Shapiro is Editor of Review:  Literature and Arts of the Americas and a Distinguished Lecturer at The City College of New York, Department of Classical and Modern Languages & Literatures. In addition to publishing poetry collections, he has translated Latin American authors and received translation grants from PEN and the National Endowment for the Arts.

Elizabeth Lowe, Guest Editor of Review 102, is a professor of Translation Studies at New York University. She has translated major works by Brazilian and Lusophone writers, including João de Melo, Clarice Lispector, Machado de Assis, and Euclides da Cunha, and is currently working on two books by Nélida Piñon. Lowe received a National Endowment for the Arts Literary Translation Grant for 2020-2021 and a Fulbright Scholar award for research and teaching in Brazil on the topic of digital literature for 2021-2022. Her most recent translation is The Last Twist of the Knife, a novel by João Almino (2021).

J.P. Cuenca was born in Rio de Janeiro and is the author of five books translated into eight languages. His latest novel, Descobri que estava morto (I Found Out I Was Dead), was awarded the prize for best novel of 2017 by the Brazilian National Library Foundation. The author wrote the screenplay and acted in the film version of the novel The Death of J.P. Cuenca (available on www.jpcuenca.com).

Paulo Dutra is Assistant Professor of Portuguese and Spanish at the University of New Mexico. He is the author of a short-story collection, Aversão oficial: resumida (2018; Official Aversion: Summarized), and a book of poetry, Abliterações (2019; Abliterations).

Noemi Jaffe (São Paulo, 1962) is a writer, teacher, and literary critic. She works as a literary critic for the Folha de São Paulo and is a director of the writing collaborative “Escrevedeira,” a São Paulo-based organization that promotes reading and creative writing and sponsors events for the literary community. Her novel What Are the Blind Men Dreaming?, translated by Julia Sanches and Ellen Elias Bursac, was published in 2016. She won the Brasilia Prize in Literature in 2014 for A verdadeira história do alfabeto (The Real Story of the Alphabet).

Cristina Pinto-Bailey, born and raised in Rio de Janeiro, is a writer, scholar, translator, and Visiting Associate Professor at Washington and Lee University. She writes on issues of gender and race in works by modern and contemporary Latin American women writers, with a special interest in authors from Brazil and Argentina. She has published extensively in scholarly journals, as well as her own creative works, and translations of Brazilian literature into English. Her translation of Maria Firmina dos Reis’s Ursula (1859) will be published in 2021.

Cristiane Sobral (Rio de Janeiro, 1975) is a renowned Afro-Brazilian writer whose work has appeared in Cadernos negros, Poets.org, and Words Without Borders. She has published plays and various collections of poetry and short stories. Her writings often deal with themes such as self-identity, “negritude,” sexism, and racism. Sobral is also an educator, theater director, and actor, having performed in television, cinema, and theater.

All the participants above are contributors to Review 102 (Digital Brazil: Voices of Resistance).