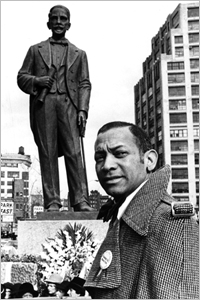 Juan A. Paulino is one of the first two prominent members of the Dominican community to donate their papers to the CUNY DSI Archives. The Institute is tremendously  grateful to this pioneer who entrusted us with his precious historical legacy. Mr. Paulino's long history of community activism helped establish the Dominican people as a  leading ethnic group within the New York City mosaic. He worked tirelessly and effectively to promote Dominican culture in New York City, engendering a great sense of  pride among Dominicans in their roots. Mr. Paulino is a pioneer in the unique historical development of the Dominican People in the United States.

In 1962, Mr. Paulino moved to the New York City and established residence on Hoe Avenue in the Bronx. He has also lived in Manhattan during some periods of his 44  years in New York City. In 1963, encouraged by the activism of the New York Puerto Rican community, Mr. Paulino dreamed of erecting a monument in Manhattan to honor Juan Pablo Duarte y Diez, the leading historical figure among the founders of the Dominican Republic. In 1966, together with Normandía Maldonado, Marina Maldonado, Victor Liriano, and Manuel Medrano, Mr. Paulino founded the Club Cívico y Cultural Juan Pablo Duarte, a civic and cultural organization devoted to promoting awareness about Juan Pablo Duarte and his ideals. Under Mr. Paulino's leadership, the organization became the principal advocate for the erection of a monument, in Manhattan, to honor the great Dominican patriot.

Juan Paulino's civic leadership and enthusiastic efforts to erect the statue were acknowledged in 1971 by Dominican Republic President Joaquín Balaguer. On July 19, 1971 Juan Paulino was decorated with the "Orden del Mérito de Duarte, Sanchez y Mella" conferring upon Mr. Paulino the title of Caballero (Knight), established in memory of the Founders of the Dominican Republic, Juan Pablo Duarte, Francisco del Rosario Sánchez, and Ramón Matías Mella. The citation is the highest civilian honor conferred by the Dominican government. Mr. Paulino is the first and one of only a few Dominicans living outside the Dominican Republic to receive this honor.

The Juan A. Paulino Collection consists of correspondence, newspaper clippings, invitations, minutes of meetings, financial ledgers, certificates and awards, subject files and memorabilia relating to Mr. Paulino's activities and involvement in Club Cívico y Cultural Juan Pablo Duarte and in the campaign to erect the monument to honor Juan Pablo Duarte. The collection also contains photographs of his private life, family outings, baptisms, birthday celebrations, as well as other papers related to his work as a civic leader.
Inclusive Dates: 1950s-1991
Size of Collection: 5 cubic feet