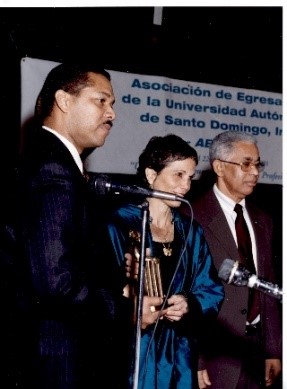 Historical Note: The Asociación de Egresados de la Universidad Autónoma de Santo Domingo (UASD) was created in 1991 by Juan Lulio Blanchard, Rafael Díaz, and Marino Mejía. Its membership consists of former UASD graduates and students who began their studies at the UASD and migrated to the United States before completing their studies. The organization is designed to organize programs to stimulate scientific investigation, together with the social, economic, and political problems that affect the Dominican community.  It has a membership of 350 members who participate in all activities sponsored by the organization as well as other community activities. Egresados de la UASD organizes from five to seven activities per year, including a gala in which they recognize the most outstanding professional for the year. The winner receives a $5,000 and award in honor of Fray Anton de Montesinos.

Scope and Contents Note: The Asociación de Egresados de la Universidad Autónoma de Santo Domingo (UASD) Collection consists of approximately 300 digital photographs relating to the functions of the academic organizations from 1992-2004. It contains correspondence, photographs, newspaper clippings, video and audio tapes, newsletters, minutes of meetings and other documents relating to the activities of the organization from 1992-2004.