NEW YORK -- “Camino Real,” the journal of the Instituto Franklin of the University of Alcalá, Spain, has published a special issue devoted to Dominican studies, a growing field in the United States focused on the study of people of Dominican ancestry.  This is the first time a multidisciplinary academic journal has published an entire issue devoted to the field.  Dr. Ramona Hernández, director of the CUNY Dominican Studies Institute (CUNY DSI), based at The City College of New York, and Anthony Stevens-Acevedo, CUNY DSI assistant director, edited the issue. 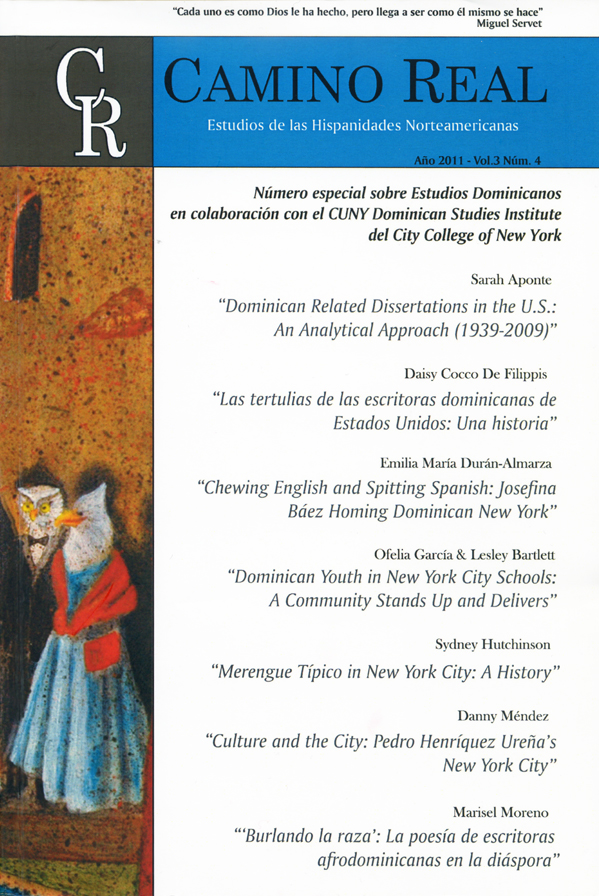 “This monograph issue is an important recognition for the emerging field of Dominican studies and Dominicanists, as well as for the CUNY Dominican Studies Institute,” said Dr. Hernández.  “It furthers CUNY DSI’s stature as the leading institution in the United States devoted to the study of people of Dominican ancestry.”

The journal comes out at a time of significant demographic changes in the Dominican population in the United States.  Defined as people who trace their ancestry to the Dominican Republic, they have become one of the largest Latino immigrant groups in the country, numbering more than 1.4 million people.  Single women head more than one third of U.S. Dominican families, noted Dr. Hernández, a sociologist who focuses on labor and migration studies.

Additionally, there has been significant movement of Dominicans away from traditional Latino gateways such as New York City. According to Dr. Hernández, “In 1980, three out of four Dominicans living in the United States lived in New York. By the mid-2000s, that proportion had dropped to about half.”

These changes, combined with a growing second generation that is driving educational attainment and deepening Dominicans’ civic and cultural engagement, point to the community’s growing influence in the popular culture, politics, business, the arts and literature.

Dr. Hernández notes, however, that sparse attention is being paid to the study of the Dominican population in the United States. Academic research continues to focus on the view of Dominicans as a “transnational” migrant community, she adds.

Dr. Hernández expressed hope that this special issue of “Camino Real” augurs well for the future of Dominican studies.  “It is our hope that the broad range of topics and the multidisciplinary approach of the selected papers demonstrates the richness of the field and encourages new lines of inquiry,” she said.  “Courses in Dominican history, culture, and society are still extremely rare in U.S. colleges and universities despite a very long history of political and cultural engagement between the United States and the Dominican Republic.”

Highlights of the articles that appear in the special issue:
•Sarah Aponte provides a statistical analysis of the more than 600 doctoral dissertations published in the United States on Dominican-related topics since 1939;
•Dr. Daisy Cocco de Filippis writes about the history of the tertulias (literary circles) of Dominican women writers in New York City;
•Emilia María Durán Almarza provides a reading of playwright and poet Josefina Báez's performance text “Dominicanish;”
•Ofelia García and Lesley Bartlett write about the notions of “trust” and “care” in a Dominican-run high school for newly arrived immigrant youth in Washington Heights;
•Sydney Hutchinson explores the musical influence of New York merengue bands on merengue típico, which is the most folkloric expression of the merengue, the Dominican Republic’s national dance;
•Juleyka Lantingua-Williams interviews Pulitzer prize-winning writer Junot Díaz;
•Danny Méndez examines the racial and affective gaps in the New York memoirs of Pedro Henríquez Ureña; and,
•Marisel Moreno writes about the Afro-Dominican identity of immigrant poets like Marianela Medrano and Sussy Santana.

The special issue is available on Instituto Franklin’s website by subscription:
http://www.institutofranklin.net/en/publications/revista-camino-real

About “Camino Real”
“Camino Real” is an official publication of the Instituto Franklin, established in 1987 as Centro de Estudios Norteamericanos, a university research institute of the University of Alcalá, Spain. “Camino Real” is a peer-reviewed and multidisciplinary publication, and is published twice a year, spring and fall.  It is divided into four sections - critical articles, interviews, reviews and creative writing - and includes articles that reflect the different sensibilities and peculiarities of the Hispanic world in the United States, including artistic, political, economic, sociological, cultural, literary and historical perspectives.

About Instituto Franklin
The Instituto Franklin is a research institute of the University of Alcalá, Spain.  Its main mission is to serve as a cooperative and unifying communication platform between Spain and North America, with the goal of promoting mutual understanding.  The Instituto Franklin fulfills its mission by: fostering and nurturing the creation of groups of researchers in collaboration with different North American universities; offering official post-graduate training (master’s degrees and doctorates in North American Studies); disseminating the knowledge about North America through diverse publishing venues, and organizing academic meetings of national as well as international character on themes inherent to the mission of the Institute itself.


About the CUNY Dominican Studies Institute
Founded in 1992  at The City College of New York, the Dominican Studies Institute of the City University of New York (CUNY DSI) is the nation’s first university-based research institute devoted to the study of people of Dominican descent in the United States and other parts of the world.  CUNY DSI’s mission is to produce and disseminate research and scholarship about Dominicans and about the Dominican Republic.  The Institute houses the Dominican Archives and the Dominican Library, the first and only institutions in the United States collecting primary and secondary source material about people of Dominican descent.   CUNY DSI is the locus for a community of scholars, including doctoral fellows, in the field of Dominican studies.  It sponsors multidisciplinary research projects and organizes lectures, conferences, and exhibitions that are open to the public.