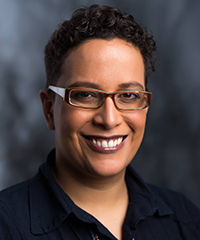 Ana-Maurine Lara is currently an Assistant Professor of Anthropology at the University of Oregon. Her areas of interest include Afro Latino/a identities, black queer aesthetics, Vudú in the Dominican Republic, and Afro-Dominicanidad and the struggle against xenophobia in the Dominican Republic. Also an award-winning novelist and poet, Dr. Lara spent 10 years as a writer and performance artist before deciding to pursue a Ph.D. in African American Studies and Anthropology at Yale University. Her short stories and poems have been published in numerous anthologies and literary magazines. In addition, she has written and performed many plays and performance art pieces, most recently Landlines (2015), a performance project based in Eugene, Oregon, and The Hope Chorus (2015), a performance piece for which the MRG Foundation selected her as their 2015 Lilla Jewel Artist and which took place at the Justice Within Reach symposium at the Portland Art Museum.

At the Dominican Library Dr. Lara researched the role of Dominican women artists in New York City’s socio-political landscape, as well as their contributions to civic and political activism. Dr. Lara’s project will be the one of the few scholarly works to provide concrete historical research on a body of knowledge that has heretofore been anecdotal: how the work of Dominican women artists and activists has risen to the occasion to represent, contest, and provide multiple languages for Dominican dreams, struggles, and visions for social change in New York City in the mid-20th century.

Dr. Lara worked specifically with the Dominican Library’s Normandía Maldonado collection, as her current project is inspired by the latter’s important institution-building work in the mid-twentieth century. Through the application of critical research methodologies and her choice of diverse venues to present the results of this project, Dr. Lara continues to cross disciplinary boundaries, to bridge academic research with civic engagement, and to minimize the gap between art, activism, and scholarship.