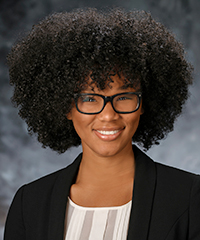 Eva Michelle Wheeler is Assistant Professor of Spanish in the Department of Languages and Linguistics at New Mexico State University, where she also serves as the faculty advisor for a supplementary major in Latin American Studies. As a sociocultural linguist, she has investigated the relationship between language and social phenomena, and the intersections of language and race. Her primary line of research investigates the semantics of racial terms in the Dominican Republic, and her proposed project will build on and expand her existing work to include attention to broader discourses on race in the Dominican diaspora.

Specifically, her current project will focus on the potential fragility of Afro-Latina/o blackness, and begins with an analysis of the 2016 biopic on Nina Simone, which stars Zoe Saldana, an Afro-Latina of Dominican and Puerto Rican heritage. Dr. Wheeler will analyze discourse around the choice of Saldana to play a Nina Simone, which met with widespread criticism, with a significant number of commentators claiming that Saldana was not, in fact, black, but rather Latina. Dr. Wheeler examines this controversy and its aftermath as an entry point to a broader conversation on the boundaries of the black diaspora: who is included, who is excluded, and whose prerogative determines the decision. In contrast to the inclusion created by the “One Drop” rule, Dr. Wheeler focuses on the experience of Afro-Latinos, particularly of Dominicans, as they are placed in the position of having to prioritize their blackness over their nationality and linguistic heritage. This project will specifically explore how black-identified Dominicans respond to challenges to their blackness that are mounted by other members of the black diaspora.

Dr. Wheeler was in the CUNY DSI Archives and Library for guidance and to study key sources for the initial stages of her research on black identities in the Dominican diaspora. Access to the Dominican Library’s collection of books, manuscripts, journals, dissertations, and theses proved to be invaluable as she traces the diachronic development of challenges to and interrogations of Dominican rights to blackness. Her larger project will also incorporate interviews with black-identified members of the Dominican diaspora and other members of the black diaspora. On this latest research, Dr. Wheeler has stated that “Although in some ways this type of project is new for me, it is actually a return to my original impetus for my research: my own interactions with the Dominican diaspora community in New York City, and my attempts to reconcile this identity with the racial system I adopted as an African-American. I am very much looking forward to beginning to explore these themes in my academic research.”