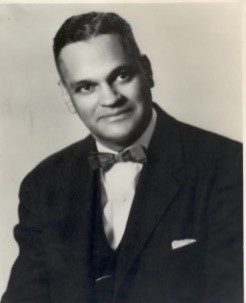 Biographical Note: Hope Reynolph Stevens was born in East End, Tortola, British Virgin Islands on February 4, 1905 to Ethelinda L. Penn and James Stevens, who was born in Dieppe Bay, Saint Kitts. Hope R. Stevens lived in Nevis from 1911 to 1920 and in Saint Kitts from 1920 to 1924. In Nevis, he attended the Boys Elementary School in Charleston and Excelsior High School (3 years through the Junior Cambridge Exam, 1919). He was employed in the Saint Kitts Civil Service - Customs for two years and for three years at the Public Works.  He moved to San Pedro de Macoris, Dominican Republic to work as a sugar cane laborer in 1925 where he lived for over five years and became fluent in Spanish. He also possessed a working knowledge of written and spoken French. He came to New York City on July 4, 1929, and enrolled in the New York Evening High School (for one term) and the Knights of Columbus High School (also for one term) in 1930. He attended The City College of New York from 1930 to 1933 and completed two years of academic work, then subsequently transferred to the Brooklyn Law School of Saint Lawrence University where he obtained his LL.B (Bachelor of Laws) in 1936 and his LL.M (Master of Laws) in 1937.  He became a citizen of the United States in 1936. In Oct. 1937, Stevens was admitted to the New York Bar, First Department. He married Alice McGee Perkins a New York City school teacher and a Florida native. They did not have any children. However, he had two children: Anthony Stevens Acevedo and Yvonne Stevens Attard.

Scope and Contents Note: The Hope R. Stevens collection contains personal and professional documents, records, and other materials documenting papers, photographs, correspondence, notes and memorabilia, all associated with Hope R. Stevens professional work, civic and social life from the 1930s to the 1980s. Stevens was a prolific lawyer in Harlem, starting in the late 1930’s  until his death in the early 1980’s.  The materials found in this collection are artifacts, documents, legal documents and records, photographs, books and other publications. Most noteworthy artifacts in this collection are Stevens’ award of the Order of the British Empire medal in its original case, a certificate that was given with the medal, and letters written to him congratulating him on his award. There are records and documents of Stevens’ private life, such as his will and testament, naturalization certificate, passports, correspondence, and his death certificate and memorial services. The other records and documents collected note Stevens’ professional work as a local Harlem lawyer and international lawyer, and his affiliations and activism with certain local and international organizations and projects. There is a collection of materials on the trail of Pol Pot, which Stevens took part in as an international lawyer, and these include legal reports, mission statements, testaments, and speeches given at the trail of Pol Pot. Other materials include documentation of his affiliations with local and international organizations. For instance, his affiliation with the Harlem Urban Development Corporation shows his involvement with the development of Harlem. Law organizations, such as the National Conference of Black Lawyers and the World Peach through Law, documents his involvement in attending meetings and conferences, illustrates how prolific he was in different international organizations.